Wheeler honored as Teacher of the Year 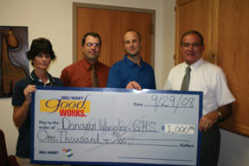 Greencastle High School's Donovan Wheeler was chosen Teacher of the Year by the Putnam County Wal-Mart Monday. He was presented with a check for $1,000 to use in classroom programs and another $100 gift certificate. Presenting the check to Wheeler are Kim Brattain, Wal-Mart Community Coordinator, Wheeler, Cliff Higgins, Wal-Mart Store Manager and Jim Church, GHS principal.

"Mr. Wheeler is so much more than a teacher. He's a friend. He treats you like an adult and really cares about each and every student. He does everything he can to help you in and out of school," noted GHS Senior Bo Walker.

Ballot boxes were put out in the Greencastle/Putnam County Wal-Mart for the nominations.

It was no surprise to GHS students that Wheeler won the most nominations although the teacher himself was taken aback.

"I was really caught off-guard and am very flattered," said Wheeler.

"Thank you to all the students who spoke on my behalf," he continued.

This is Wheeler's 17th year of teaching. He has been at GHS for the last 12 years.

As a student, Wheeler did not necessarily excel. In fact, he told the Banner Graphic he almost didn't graduate his senior year.

"I spent the summer mowing lawns and thinking about what I could have done," he said.

"I decided to put my money where my mouth was," he added.

Wheeler decided to attend Indiana State University where he says he was influenced by several professors who had a tremendous impact.

Other major influences in his life were Bob Berry and retired GHS Football coach and teacher John Fallis.

"The two are on opposite ends of the spectrum but both have been very important in my life," said Wheeler.

Wheeler was born and raised in Spencer, went to ISU in Terre Haute and began his teaching career in Warsaw. His wife, Amy is a forth grade teacher at Tzouanakis Immediate School. The couple has two children, Jerry, a sophomore at GHS and Emily a seventh grader at GMS.

GHS principal Jim Church called Wheeler, "One of the finest teachers I've ever worked with. He is one of the best."

Wal-Mart sponsors the Teacher of the Year award.