Tigers look for upset in Mississippi

The Tigers spent the last two seasons in contention for the conference crown, but finished third to Millsaps and Trinity in both seasons. Saturday will be their first big chance to shift the balance.

While DPU coach Matt Walker likes to treat every game the same, he knows the significance of Saturday, as do his players.

"Millsaps is, along with us and Trinity, one of the powers in the conference," Walker said. "You want to make sure the players treat them all the same, but they know. They're smart enough to know the conference has come down to the three of us the last two or three years."

The Tigers head into Saturday after a 27-20 win over Sewanee last week that was much closer than it looked like it would be. The Tigers led 24-7 at the half, but struggled to hold off Sewanee for a seven-point victory.

"The good thing about winning a game like last week is knowing that we played so mediocre in the second half and still won," Walker said. "We know our best football is still ahead of us.

"One exciting thing about our team is we feel like we're continuing to improve in almost every phase of our game," he added. 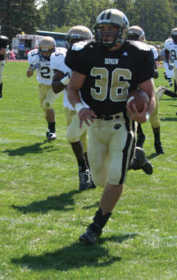 Derrick Karazsia is part of the Tigers' multi-headed running attack that will try to establish ground dominance Saturday.

On offense, that certainly holds true. The rushing attack has improved in each of the three weeks. Running backs Jon Ellis and Derrick Karazsia combined to average 4.9 yards per rush on Saturday, up from 2.8 in week one against Anderson. Ellis ran 23 times for 107 yards, while Karazsia rushed for 49 yards on nine carries.

Additionally, the DePauw receiving corps is surviving an injury-plagued early season. Both No. 1 receiver Alex Koors and last year's yardage and catch leader Bryan Mulligan missed the week three win, but the passing game remained efficient. Quarterback Spud Dick was 14-for-25 for 212 yards, two touchdowns and an interception.

Going into week four, the receiver position remains the most up in the air, as Koors is questionable, Paus is out with a broken finger and tight end Mark Branigan is doubtful.

On the bright side, Dahlstrom is healthy and Mulligan is back. Chris Gasbarra and Nick Etzcorn also remain healthy.

That defense will need to be even better this week. Millsaps runs a wide-open spread offense that averages 415 yards per game -- 284 of those through the air.

The Majors are fresh off a 49-2 drubbing of Rhodes on the road last week. They are outscoring their opponents an average of 42-7.

"I'm excited for our defense," Walker said. "Clearly it's a big challenge for them to stop this offense. I think our defense has been playing well."

The Major offense is led by two-time SCAC Offensive Player of the Year Juan Joseph. The senior has completed 61-percent of his passes for 977 yards, 14 touchdowns and just one pick.

Joseph spreads the passes around, but his favorite target is fellow senior Eric McCarty, who has grabbed 22 balls for 278 yards and five touchdowns. Burt Pereira, Michael Galatas and Raymece Savage have all caught at least 10 passes.

The rushing game is almost an afterthought for the Majors, as Joseph currently leads them in rushing from the QB position, totaling 123 yards in four games. Schuyler Huff is the leading running back, having run 28 times for 119 yards and three scores.

"Their athletes are as good as any we play. They're the fastest team we play all year," Walker commented.

Defensively, the Majors are stifling, giving up just 92 rushing yards per game (2.6 yards per rush) and 155 passing yards. They have also intercepted eight passes and recovered seven fumbles.

Last year's matchup at DePauw remained close through the first half, as DPU trailed 7-3 at the break. But it got out of hand after halftime on the way to a 35-17 Millsaps victory.

As the Tigers tried to keep pace, Dick threw 45 times in the loss. Walker doesn't want to see that again this year. DePauw needs to play its game.

"Last year we played them tough in the first half, but we got behind. We feel like we tried to get out of our game plan. We have to focus on what we want to do," he said.

So the essential question of the game is whose style will win out. Will Millsaps be able to air it out at will, creating a shootout? Will DePauw get the ground game going and control the ball and the clock?

"Last week was the clash of the same style. This week is a clash of two opposite styles," Walker said.

DePauw will travle10 hours and 640 miles for this SCAC clash. The game kicks off at 2 p.m. Saturday at Harper Davis Field. The game will be broadcast live on WGRE 91.5 FM.