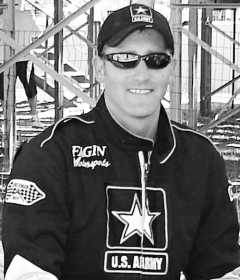 The US Army/Fagin Motorsports race team with driver Brandon Fagin has filed an entry for the 37th Annual Winchester 400 presented by Ed Martin Auto Group and Renegade on Sunday October 12. The race features the CRA Super Car Series Late Models.

Fagin is competing in his first year of competition with the CRA Super Series had a 13th place finish at the historic Winchester Speedway on September 1.

Fagin graduated from Cloverdale High School and the US Army race shop is in Cloverdale.

"It was a crazy day at Winchester. On Sunday the car caught fire and on Monday, race day, the car got hit in the pits by a racecar from another division practicing. With the help of some other teams we were able to make the repairs and at least finish the race. I look forward to the '400'. It's a long really fast race that takes patience and a lot of luck. I can't wait," said Fagin

Fagin, a fifteen year racer who makes a living as a Fireman in Evansville feels a special bond with the US Army troops he represents on the race track.

"When I look out of my windshield and see the big US Army star on my hood, I get goose bumps. Having the greatest fighting force in the world represented by our race team is very special. While I have been in buildings with fire all around, I can't imagine what it's like to have bullets flying around you. I have the utmost respect for all of the men and women of the US Army."

NASCAR superstar Kyle Busch and Nationwide Series driver David Stremme will be competing in the event which also has the US Army as a corporate sponsor.