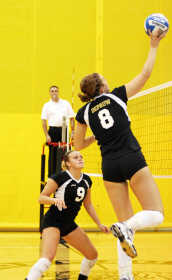 Kristen Chynoweth (8) rises above the net to score a kill while Ali Smith looks on. Chynoweth recorded six kills, five digs in the contest.

DePauw came out firing on all cylinders, taking the Screaming Eagles by surprise. Some key digs by Emily Smith and powerful hits from Adrienne Cobb helped lift the Tigers to victory in the first game 25-18.

When asked after the contest about her team's first game performance, head coach Deb Zellers was delighted with what she saw from her team.

"I was really pleased," Zellers said. "We connected really well, we didn't back down, we were confident and I was pleased with how we took control in that first game. From an execution standpoint, we executed very well. Our passing was good, so we got into our system and we were able to be aggressive then and keep them on their heels."

Coming into the game, DePauw knew they would be facing a tough challenge in facing the Screaming Eagles. Zellers explained that they scheduled USI with the idea that the Division II squad would stretch the team into areas other teams might not and she thought that was accomplished on Wednesday.

"I felt like we played pretty well even though we fell short overall," Zellers said. "That was the type of match we wanted because we really wanted to prepare for our conference season. Our conference is really tough and those are the types of teams we're going to see at the top of our conference. By being competitive with them, we learned some things about ourselves and that was our goal."

Despite dropping three consecutive games to lose the match, the Tigers learned what they need to work on with some big opponents looming large on the horizon.

"I think we're disappointed that we lost, but at the same time we can learn some good lessons from this and know where we need to focus in our next couple of practices," Zellers said.