CRAWFORDSVILLE -- The 2008 season was most certainly a learning experience for the North Putnam boys' soccer program.

Coming into the year with few experienced players, they struggled with fundamentals in the early part of the season, giving up more than 10 goals a game and not scoring their first goal until into the second half of the year. 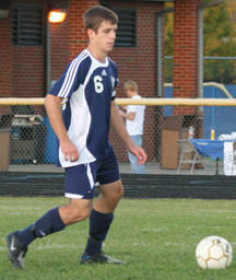 Cougar sophomore Cody Summerlot brings the ball upfield in the first half.

This week, the Cougars showed what they have learned. On Monday, they got their first win of the season, defeating South Vermillion 3-0.

"Fundamentally, at the beginning of the year we didn't have too many experienced players," NP coach Dave Moeller said. "So, we were just working on fundamentals. I think as the season went on, that improved overall."

As to Thursday's game, the Cougars couldn't have liked the sectional draw when they saw it, but they hung with the Mounties (12-4-1) early in the match.

"As far as this game goes, we played well," Moeller said. "We played them tough in the first 20 minutes, then they got a goal and we got down for five or 10 minutes and they put a few more goals in."

Although the game had been played almost exclusively in Cougar territory, the defense held strong, especially that of goal keeper Brandon Volland. The keeper finished the first half with nine saves and collected 15 on the night.

The Mounties finally broke through, though, when Erik Garcia took an assist from Chris Rash to score with 16:53 remaining.

"That's kind of a pattern we have; we just kind of let down after we give up a goal," Moeller said.

Ethan Smith did the final damage of the half, putting one past Volland with 4:16 to go.

With his team trailing 4-0, Moeller was most concerned about effort at the half.

"I told them at halftime, 'I don't care what the score is, go out there, play 40 minutes, give 100 percent and come off the field knowing you gave everything and didn't short your team," Moeller said.

Moeller's team responded. The second half was played on much more equal ground, as more of the action was around midfield than the Cougar goal. 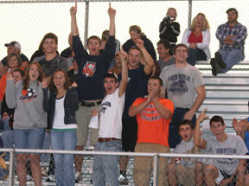 A group of North Putnam students get loud in their support of the soccer team.

"In the second half we played a lot better defensively. We only allowed one goal, it was just a missed mark," Moeller said. "We created a few chances. We had an opportunity or two in the second half to score."

The biggest opportunity came at around the four-minute mark, when senior Cody Paul took away a pass and dribbled toward the Mountie goal. He had keeper Nick Truncone beaten, but the shot sailed high and right.

The focus now turns to 2009. The Cougars graduate only three, but also don't return large numbers. The Cougars fielded 12 underclassmen this year, only one of whom was a freshman. Moeller is looking for ways to boost participation.

"We lose three seniors this year, so we're a younger team," Moeller said. "We only have one freshman, though, so we're going to need some eighth graders to make an impact.

"I think this spring, we're going to try and get a spring program started so we can compete with all the other programs in the area that have youth leagues," he concluded.

The Mounties will face Crawfordsville at noon on Saturday for the title. The Athenians defeated North Montgomery 4-0 in Thursday's first game.

Next game -- Southmont will face Crawfordsville at noon Saturday in the sectional championship. North Putnam finishes the season 1-16.