When a team can average more than nine yards per carry, they are likely in for a good night.

That was the case for Greencastle Friday night, as they rushed for 301 yards on 32 carries en rout to a 48-14 homecoming blowout of Cascade. 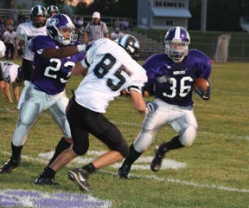 With teammate Ashton Marshall (23) throwing a helpful block, Greencastle junior Patrick Richardson runs for the first of his three touchdowns.

"I'm really happy with the way we ran the ball," GHS coach Mike Meyer said. "Jordan ran it well, Ashton ran it well and Patrick ran it well. We did what we wanted to do on the ground, which I'm very happy with."

After a punt on the opening series, the Tiger Cubs scored on the next three possessions.

With 7:38 to play in the first, Marshall took a pitch from Hickam and scored on a nine-yard run. The Buzz Deer kick made it 7-0.

Three minutes later, Richardson scored from four yards out to make it 14-0. The run capped an impressive drive in which GHS covered 74 yards in just four plays and 45 seconds.

The Tiger Cub defense was also more than holding its own. Although Cascade was able to move the ball at times, Greencastle showed a gift for getting to the ball, as the Cadets fumbled eight times on the night and GHS recovered five of those.

"Defensively, I thought we did a very good job. We shut them out for three quarters. They scored on our young pups," Meyer said.

After opening the second with a pair of three-and-outs, Greencastle once again took advantage of a turnover. This time they took over on the Cadet 39. After an incomplete pass, Richardson covered the entire distance in one run, making it 27-0 with 2:55 until halftime.

On Cascade's next possession, the defense took care of its own scoring. With the Cadet runner stopped for a loss, the ball popped loose, and Kyle Buchanan recovered his third fumble of the night. He took this one 23 yards for a touchdown and a 34-0 lead going into the half.

The third quarter was very efficient for GHS. They kept the ball on the ground, running 9 times for 117 yards and two scores in the period. Marshall scored his third TD on a 22-yard run with 9:01 to play in the half.

Not to be outdone, Richardson scored his third touchdown by pushing through the pile for five yards with 0:29 remaining.

With the lead well in hand, Greencastle called in the JV for the fourth quarter, and the Cadet varsity benefited. Nick Hensley had a 16-yard score and Justin Helmick added a 19-yarder with 1:02 to play.

With two straight wins and a .500 record, Meyer's squad is beginning to see the fruits of its labors paying off.

"After we had such a lousy start, our thing was, 'Guys, just hang in there. Keep believing.' They're believing and working hard. They're doing some good things," Meyer said. "I was very happy with the way we played. We're getting a good run together, and we have a good team coming in next week in Owen Valley."

"Can we get better? Yes, we gotta get a little better," he added.

Looking at the Patriots, one sees a team that's had mixed reviews this year, much like GHS. OV also enters the season finale at 4-4.

"They've been up and down like we have. They run the ball very well. They're going to be aggressive up front, and we're going to have to work at it. We gotta get better on run defense, and I think we can do it," Meyer concluded.

Next game -- Greencastle hosts Owen Valley in the regular season finale at 7 p.m. next Friday.