DePauw looks to carry momentum to Trinity with new-look offense

With their three top running backs down to injury last week, the DePauw football coaching staff had to make a choice -- keep trying to run the same offense with less-than-ideal personnel, or go with the strength of their talents and install a spread offense.

Looking at the possibilities, the choice was simple for coach Matt Walker and staff. 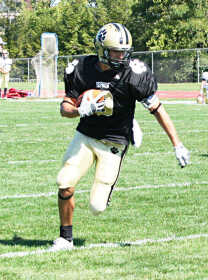 "Instead of just dabbling in it, we went all out," Walker said. "We looked over there and had all these wide receivers who are probably our best athletes. And our quarterback is pretty good, too."

And go all-out they did, running a shotgun, five-wide receiver offense for the bulk of Saturday's 31-21 come-from-behind victory over Birmingham Southern.

The change in offense went well for quarterback Spud Dick, as he threw for a career-high 395 yards as well as two touchdowns. Alex Koors led the receivers, catching seven passes for 104 yards.

The running game wasn't abandoned all together, though, as Mitchell Willsley led DPU with 20 carries for 132 yards.

"The spread is obviously going to be in the plan," Walker said. "We're going to try and mix in more of the stuff with other guys getting healthy.

"Going back and forth between the two formations was pretty good for us. We were getting good, positive yards," he added.

Health continues to be an issue for the Tigers, although things are slowly moving in the right direction. Running back Alex Karazsia is questionable for Saturday, while Chris Collins and Jon Ellis remain doubtful.

However, wide receiver Brad Paus will be back as well as safety Kelly King. Tight end Mark Branigan, who played last week, but with a lingering injury, should be back at full strength.

Injuries aside, the other team will be the big struggle. Besides being nationally ranked, Trinity has been DePauw's biggest problem since the they joined the SCAC in 1997. The schools have faced each other on the gridiron nine times, with Trinity winning all nine.

DPU will look to reverse that trend, but it won't be easy. Trinity is playing exceptionally on both sides of the ball. They are scoring 34.4 points per game while allowing just 9.6.

The Trinity offense is balanced, as they run the ball about 56 percent of the time. However, the number could be skewed in that they are generally playing with a lead. Chris Baer leads the rushing attack, averaging 6.2 yards per carry and 112.4 yards per game.

Quarterback Bryant Wilson has completed 66 percent of his passes for 1, 067 yards, 13 touchdowns and three interceptions. His favorite target is Riley Curry, who has caught 26 balls for 312 yards and three touchdowns.

For DePauw to challenge Trinity on its home field, it will need to carry the momentum it gained in the second half of last week's win. After struggling in a blowout loss to Millsaps, and limping to a 21-7 deficit at halftime last week, the Tigers turned it on in the second half against Birmingham-Southern.

"It was a weird day," Walker said. "We played probably the worst first half we've played in a long time and then played the best second half in a long time -- and against the same team."

The DPU defense shut down the Panther offense in the second half, while the offense was spurred on by a big special teams play. With 6:50 to play, they lined up for a field goal. However, holder Michael Engle flipped the ball over the back of his head as kicker Jordan Havercamp caught the ball and ran untouched for a two-yard touchdown.

Only the two players, Walker and a couple of coaches even knew of the play's existence, but it lit a fire.

From there, DPU added a two-point conversion and then 10 more late points on the way to the 31-21 victory.

"For whatever reason, we were able to turn it on," Walker said. "It's a good way to end the game going into Trinity. You know you have to play four good quarters. We feel good about that. Clearly they pose challenges because of how talented they are."

The Tigers and Tigers collide at 2:30 p.m. Saturday in San Antonio, Texas. The game will be broadcast live on WGRE 91.5 FM.