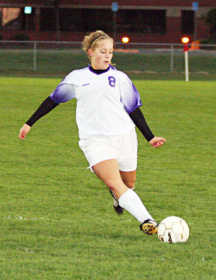 Greencastle senior Laura English scored at the 32-minute mark in Thursday's contest with South Vermillion. GHS will go for the title Saturday against Terre Haute South at 1 p.m.

The Lady Tiger Cubs poured it on early against South Vermillion on Thursday, scoring three goals in the first nine minutes, on their way to a 4-0 win over the Wildcats.

"I was pleased that they got the goals early; it set the tone," GHS coach Maurice McKee said.

With only a minute gone in the game, GHS forward Whitney Brotherton got the first scoring opportunity of the game, a shot that ricocheted off the crossbar and back into play.

The sophomore would soon make up for it, though. This time, she took the ball up the right side, beat a pair of defenders before feeding the ball to Hannah Serlin in the middle. With Wildcat keeper Amanda Payton drawn to her left, Serlin had an easy shot at the back of the net.

At the 32-minute mark, GHS struck again. This time, Laura English took hit a shot past Payton from the middle of the penalty area, and the Tiger Cubs led 2-0.

Brotherton kept the scoring alive when she nabbed a pass near midfield and once again brought it up the right side. This time she took a shot for herself, putting a third goal past Payton with 31:23 remaining.

With a solid lead in hand, though, the Lady Tiger Cubs got into a style of play that didn't please their coach.

"Obviously the other night (against Northview), we won 1-0 on a team we had beat 7-2 during the regular season. We need to be practicing finishing," he added.

The Wildcats have to be given some credit, as they stepped up their intensity and took a page from the Northview game plan by clogging the middle. However, for the remainder of the half, the Tiger Cubs had remarkably few shots for a team that was controlling the ball almost exclusively.

At the half, it was a 3-0 GHS lead. They had totaled eight shots on goal, while the Wildcats had mounted no serious threats.

"I had to fire them up at halftime to get them ready to go again," McKee said. "And I think it's a good thing I did because their team came out fired up. They picked up their defense and made it a little bit tougher on us."

The coach continued, "Our girls were passing around them and I asked them at halftime, 'Is there something I'm not seeing? Can't you chip the ball over their heads? Can't you make runs? Can't you work the ball through there?' They couldn't answer that for sure, so I knew I needed to do something to make them go back out and want to win. They stepped it up, and it's a good thing they did."

The second half was a different ball game for the Tiger Cub offense. Although they added only one goal in the second half, they kept Payton much busier, sending strong shots her way throughout the half.

The Wildcat defensive pressure was strong, but Greencastle did a better job of getting around it and actually taking shots. 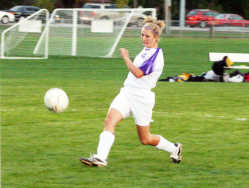 Melissa Ball connected on the game's final goal with 16:55 to play, and the scoring ended at 4-0 Greencastle.

Payton finished the game with 14 saves, while Greencastle keeper Jennifer Grumme faced no shots. She only had to touch the ball three times on Thursday, a testament the Greencastle's ball control.

Terre Haute South will present a different challenge for GHS, though. The defensive-minded Braves will not allow that so much ball control and will put a premium on finishing shots.

"It's definitely going to be a tough game on Saturday," McKee said. "I know how Mr. Drake coaches, and I know the girls are going to be ready. They're going to give it all they can because they're on their home field."

The coach looks forward to the challenge, though, as he knows the two best teams in the sectional will be battling in the final.

"I enjoy playing Terre Haute South in the final game because that's the way I've always thought it should be because a lot of years we play in the first game. That defeats the whole purpose of having a sectional, basically," McKee said.

Notable in her absence on Thursday was GHS leading scorer Hannah Spencer as she continued to deal with a calf injury. Her status for Saturday remains up in the air.

"Hannah will be going in to check with the trainer tomorrow to see how things are going," McKee said. "I would hope she'll get to play some, but I don't know. I'm not the doctor."

The Lady Tiger Cubs and Lady Braves will do battle at 1 p.m. Saturday at Terre Haute South.

"I'm real pleased. It's going to be a tough game, but we'll try to get them all ready to play," McKee concluded.