Future voters get chance to grill the candidates 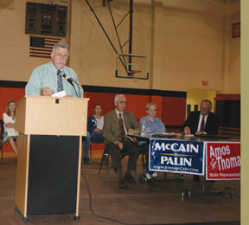 "They are good friends and very far apart in their political views," said Price. "They were perfect to show other students you can have different views politically but still be friends," he said.

The political forum kicked off a program that will include students registering to vote during their lunch periods and then casting their votes for United States President, Indiana Governor and Indiana State Representative.

"I wanted to do something significant to get kids feeling like they are involved in the process. This was a great way to bring the candidates and the election to their doorstep," noted Price.

Sixth grade students all over the country are learning about the election and politics this year. With nearly 500 middle school students in the audience the candidates and their representatives responded to questions posed by a panel of sixth grade students.

Michael and Thomas answered questions just like they have done at other debates and forums around the state.

Both candidates praised the opening of the new Ivy Tech and it's importance in the education of Putnam County students. They also agreed that the judicial system is doing a good job with child support issues.

"The judicial system is exactly where it should be. Sometimes people just do the wrong things. Putting parents in jail doesn't always help" said Michael.

Thomas basically agreed, " We have a good system in place and don't need to change anything," he said.

Skillern spoke about green house gas effects, the 3.5 billion acres set aside for protection plus giving the schools $750 million in funds.

Hazelgrove talked of middle class families, reducing oil from other countries, developing other oil sources, making healthcare affordable and getting the troops out of Iraq.

After the event, students continued to talk about the debate in other classes.

"Several teachers told me they came to class and kept talking about the candidates and their views. That was great to hear," added Price.

At the beginning of the debate, sixth, seventh and eighth grade students were asked which candidate they supported by clapping and yelling. It was hard to tell a difference.

At the end of the forum, they were asked again which candidate they supported.

"I think the Obama group was a little bit louder," said Price. "Some kids really enjoyed the ladies feeling they spoke more to them. Others liked the men because they gave the impression they were smarter," smiled Price.

The important lesson Price wanted to get across to students is "not to be angry about politics rather be conversant. I am hoping to turn toward a more civil discourse in politics," said Price.

Hazelgrove and Skillern certainly proved his hope to be a truth at North Putnam Middle School as the two students headed back to class together just as good friends as they were before the debate.