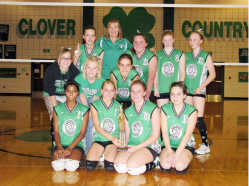 The Cloverdale eighth grade won the Putnam County championship in two games 25-17 and 25-22. The Clovers headed into County with injury and absences. The team worked hard to try and make adjustments to the line-up to cover the substitutions that were new to the normal line-up.

The CMS seventh grade won the Putnam County title in three games. Leading the Clovers were Adrianna Patterson with 13 points, Lyndsay Roboson with 12 points and Rebeka Jordan with nine points.