Two powerhouse football squads, a game guaranteed to pack the stands, chilly temps and the possibility of rain? It must be time again for sectional football.

Rarely does an opening game of football sectional have the possibility of outshining the title game, but that's exactly what's happening in the northern part of the county tonight. South Putnam travels north to face the Class 2A No. 1 ranked Cougars in a rematch of Sept. 12, where North Putnam came away with a 20-6 win. 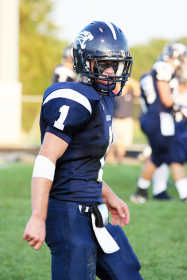 What's on the line?

For North Putnam it will be remaining perfect in the standings and one step closer to their preseason goal of greatness. For South Putnam it will be to prove that despite their 3-6 record, they are more than capable for any challenge the Cougars present them.

Both coaches spoke about how they've tired to remain in the regimen that they've used all season and not change too much leading into possibly their most important game of the season thus far.

"We've put a lot of time in," South Putnam head coach Troy Burgess said. "We've been working hard all week, the kids have been coming in and with fall break we got a couple extra days. We've had some extra time to prepare and we've gone back and watched the film from the first time we played. The kids have worked hard."

It would be easy for North Putnam to look at its record and think that sectional would be a walk in the park, but the veterans of the squad and their coach will not let that happen. Their motto of "One heart, one beat" shows the focus the team has and that any success they have will come as a team and nothing less.

"I think we've been very focused," Barrett commented. "We've had a good week of practice and they know that South Putnam is going come in here and knock us off our tracks so to speak. We know that and I think they understand that and they're definitely a good ball club. Their record doesn't indicate how good they really are. They could easily have an eight-win season.

"We're hoping to play another good game like we did the first game and be careful with our turnovers because tomorrow night is going to be wet and muddy anyway," he added.

Something apparent when speaking with both coaches is the respect both teams have for one another.

"When you start talking about getting your program to a certain level, there's not a much better benchmark right now than North Putnam," Burgess said. "Because of how well they're playing and how well they're coached and the job Greg's done there -- we've got a lot of respect for them. 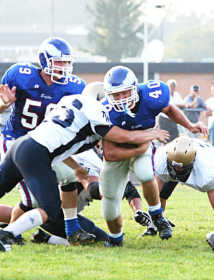 "The biggest problem you run into when you play North Put -- it's hard to find a weakness," Burgess continued. "My gosh, they run the ball well, they pass the ball well, they block up front. Defensively they're one of the top five defenses in the state. It's hard to find a flaw. Really all we can do is try to prepare and do the things we do and try to make sure we can execute and we don't make mistakes. I can promise you that North Putnam is not going to beat themselves. You know that when you play them. They're just very, very disciplined and very well coaches."

Barrett noted that even though the Cougars won the first matchup, they will have to play up to their potential to ensure a victory over the Eagles. He said that both teams had problems in the first game with turnovers, something that cost both teams possible points. Looking at the film, Barrett singled out a couple of plays that stuck with him from the previous contest.

"Getting inside the 20-yardline, I don't know how many times we did that and didn't score in the first half," he said. "That wasn't what we would like to see happen obviously and that was due to turnovers or a missed block here and South Putnam played great against us. They could turn around and say the same thing. They had some turnovers that cost them and that's why this game could go either way and why we need to be ready for any situation."

What South Putnam learned from the first game is that they can compete on the same level of the Cougars. Burgess hopes that the progression of the team throughout the remainder of the season will benefit against North Putnam.

"Our kids saw they could go out and compete. We made some mistakes in that first game as well I'm sure that Greg will say the same thing as they made some mistakes," Burgess said. "We talked about it today. It's a new season. Yeah, as much as you'd like to draw from that first game, which was also week four. I'd like to think we're a much different team in week 10 than we were in week four. I tell you what; I've watched North Putnam play. Man, if it's possible, they've just gotten better. I don't know if that's possible to do. I think both teams have improved over the last five or six weeks."

The Eagles and Cougars pride themselves in the strength of their lines. Both are quick, strong and more than willing to get dirty to get the job done. Burgess again alluded to the fact that North's lack of a weakness goes for their line as well. He acknowledged that game planning against the Cougars is difficult.

When looking at their defensive line, he said that you'd hope to run away from linemen Seth Vondersaar and Josh Keyt and if you managed to get past them you have Griffen Dahlstrom waiting in the middle. A player he had nothing but great things to say about.

"(There's) probably not a better football player for sure at the 2A level and I'm not sure there's better than him in the state of Indiana right now," Burgess said.

North has played the meat of its schedule without the services of wide receiver and returner Jarrett Ban. Barrett confirmed that Ban has been cleared to go and that the Cougars are healthy and ready to go at kickoff.

Speaking of kickoff, there's a 90-percent chance of rain at game time, something sure to play a factor in the outcome of the contest. Both coaches acknowledged that they're ready for the rain and have plans in place to get the job done.

"We're planning on it being rainy and wet and I'm sure they are too," Burgess said. "Offensively I don't think it's going to affect us. You could say we're kind of built for that. Anytime you have rain, it comes down to who takes care of the ball and who can hang onto it. Usually the team that does that has the better shot at winning."

"Yes and no, not really any different," Barrett said of his team adapting to the weather. "We also have, I guess you could say, a couple of offenses that we could get into that we work all the time. You always want to be prepared for any situation and handle adversity and have an answer for that."

The Cougars ended the season ranked No 1 in Class 2A, something Barrett and his Cougars appreciate, but put little emphasis on. The ranking is nice, but their goals go far beyond that number. Barrett knows teams are gunning for the Cougars and the ranking on intensifies their desire.

"You don't want that bullseye on your back and now it's just a bigger bullseye," Barrett said. "I really don't think our kids read into it that much, which is good. They don't talk about it; they try to stay focused on what's going on. They don't care about that ranking and I don't care about it. It's a great honor. Not that the bullseye's wasn't already on our backs, but now it's just a little bit bigger. I don't think it's going to bother them, I really don't and it can't."

The Cougars and Eagles begin battle at 7 p.m. tonight at North Putnam's Cougar Stadium. The game will be carried live on 94.3 WREB.