Cloverdale comes up short against Bulldogs 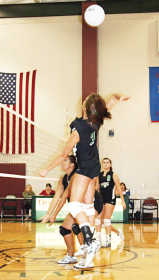 INDIANAPOLIS -- Thursday night was a case of Jekyll and Hyde for the Cloverdale volleyball team.

Much of the night the Clovers were on their game and they were neck-and-neck with Monrovia. When they struggled, they really struggled and the Bulldogs took advantage.

"The last two weeks we've been stuck on game four," CHS coach Kathy Moore said. "I don't know what it is, but we haven't been able to get ourselves to game five. In every match we've played, it's been close in game four, but we let it slip away.

"I can't take anything away from Monrovia, they have a couple of good hitters. Some of the breaks went their way, but that's just part of the game. It's just a matter of fighting through that kind of stuff," she added.

The Bulldogs looked like they would walk away with game one after they took a 22-17 lead, but CHS had a couple of nice runs left.

After a side out, three points from Allie Franklin drew the Clovers within a point at 22-21. The teams traded side outs before Alesha Evans tied the game at 23 then served two more to close out the game.

An Evans ace in the final point made the final tally Cloverdale 25, Monrovia 23.

The momentum in game one didn't carry over at all, though. After a see-saw early portion of the game, a service run from Monrovia's Jessica Standeford made it 12-5. Tiffani Dillon made another run to make it 17-6.

Both games three and four had potential to be like game one, but the Clovers couldn't clear the hump. Monrovia would build a small lead in the high teens and low 20s, only to see the Clovers make a run.

However, once Cloverdale got close, Monrovia would retake the lead and close it out. In game three, Cloverdale got as close as 21-20 before Monrovia took the contest 25-22.

In game four, the Clovers tied the score at 20, but the Bulldogs prevailed 25-21.

Moore said her team got what it expected from Monrovia. She had just hoped for another run to extend the match.

"We knew it was going to be a battle against Monrovia tonight; we knew that all along," she said. "I'm sad that it didn't go five. I'm really proud of my kids. I thought they worked hard. They went after everything, and they work hard every day in practice. They're a good group of kids."

The loss marks the end of Cloverdale's run of two straight sectional titles.

It also marks the end of the line for a large and accomplished group of seniors. Thursday night was the last in a Cloverdale volleyball uniform for Kayla Shepherd, Kristin McCammon, Maria Skiles, Franklin, Whitney Bond, Evans and Elizabeth Cheatham.

"I feel sorry for the seniors. I feel bad that that's how they're wrapping up their career," Moore commented. "They've had a wonderful run these last couple of years. It's hard to come back a third time and win sectionals. This is a tough sectional this year. There is some very good competition here. It just wasn't to be for us."

Moore will have a tough time losing such a large group that's been playing and winning together since seventh grade.

"They're great kids. They have always been very competitive. They've gotten along really well and I'm proud of them for the things they've accomplished in their career -- six county championships, two regionals in their back pockets, winning seasons, very day coming to practice in the summer, giving up their free time, giving up their boyfriends sometimes. They did all the things required to play at a higher level. I'm proud of them and I'm going to miss them," Moore said.

The 2009 season could be a tough one for the Clovers, as junior Kaileigh Sparks and sophomore Breegan Andersen were the only two underclassmen to see significant action on Thursday.

"Next year's going to be kind of a rebuilding year because I don't have that many starters returning next year," Moore said.

While the sectional loss was tough, the coach knows it's part of the deal. At the end of the night, someone is going home to stay.

"It's just unfortunate, but somebody's going to win. It just wasn't our turn tonight," she concluded.