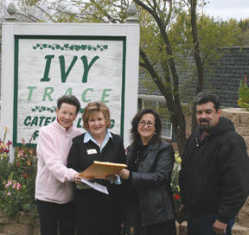 Another small piece is in place to complete the Albin Pond leg of People Pathways with the donation of .17 acre of land in front of Ivy Trace Catered Living.

The Albin Pond leg of the trail is important in the development of a "walking school bus" plan that the Greencastle School Corporation, City of Greencastle, Parks and Recreation and Peoples Pathway hopes to develop.

"When everything gets finished we hope to put the walking school bus plan into action," said Greencastle School Nurse Kathy Custis.

"We're still in the very early planning stages, but the school administration and other community agencies have signed off on the project so we'll be ready to start planning as soon as the pathway is completed," said Custis.

A walking school bus is a group of children walking to school with one or more adults. It can be as informal as two families taking turns walking their children to school or as structured as a route with meeting points, a timetable and regularly rotated schedule of trained volunteers.

"The benefits are threefold. They include improving health, lowering costs and helping the environment," said People Pathways Board of Director Joy Marley.

"This is a small but very important portion of the Pathways. Once we get all the schools connected we'll work with the administration to put the walking school bus program in place," she said.

Although this program was on the school system's radar before gas prices rose so high, it has become even more important in light of increasing costs.

School districts are feeling the pinch of rising costs. Diesel fuel used to power school buses now costs an average of $4.28 a gallon, up 34 percent in the last two years. Cities and states spend $14.7 billion annually transporting kids to school.

According to a survey done by the American Association of School Administrators in July this year, more than one third of school administrators have eliminated bus stops or routes in order to stay within budget.

Additionally, many parents are pleased at the prospect of their children being able to walk to school safely, partly because so many did so themselves.

"I remember we had to walk eight blocks to school. At every corner there were family and friends watching us," reported Rod Weinschnek, Director of Greencastle Parks and Recreation.

"We had a ball walking together and somebody was at every corner keeping on eye out. I still remember all their names," smiled Weinschnek.

"The pieces are all falling into place," said Marley who was very pleased at the latest donation of land.

"Because our residents are so independent they can really use the Pathways too. We're thrilled they can walk right past the school," said Ivy Trace Manager Carol Newman.

Newman was representing Ivy Trace Owners John and Helen Battershell who donated the land to the project.

"They try to be very involved with the community. In this case it's right in our front yard and our residents get to really enjoy it too," said Newman.