Offenders learn fathering skills through 'Inside Out Dads' 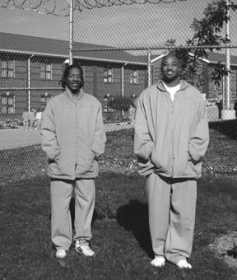 Fifty-two-year-old Anthony Lash (left) has been in and out of prison since he was 15 years old. Latell Mays, 40, is serving time for drug charges.

PUTNAMVILLE -- One of the biggest challenges for incarcerated fathers is maintaining a meaningful relationship with their children while they are doing time.

Through the Inside Out Dad program, offenders at Putnamville Correctional Facility can learn skills to make that happen.

Casework manager James Bennett is the coordinator for Inside Out Dad at Putnamville. The program is offered at facilities all across Indiana, and has been available for about two years. Melissa Langdon acts as the Putnamville program's co-coordinator.

"This is a program for guys who've never been parents to their kids," Bennett said. "They learn how to be a father and keep in touch while they're in, and then how to carry those skills over once they're out."

Latell Mays, 40, completed Inside Out Dad earlier this month. He has a 19-year-old daughter and three sons -- a 15-year-old and 13-year-old twins.

Mays went to prison for dealing cocaine when his twins were infants. He has been locked up for nearly 14 years and still has eight to go.

Mays never knew his children before he went to prison. He was out on the street, he said, and never took the time to be a true father to them.

That's changed now. All four of his children come to see him regularly.

"It's beautiful," he said. "When I was out on the street, I didn't know them and they didn't know me."

Fifty-two-year-old Anthony Lash has been in and out of prison since he was 15 years old. He was on the straight and narrow for 21 years until the death of his mother in 2004 sent him into a tailspin. He has been in prison now for 14 months due to a violation of parole on a receiving stolen property charge. He is scheduled for release in February.

"My daughter and me are real close," Lash said. "This has been real hard on her."

One of the most valuable lessons Lash has learned from the Inside Out Dad program is that he has to have a civil relationship with his children's mothers if they are going to be close to their children.

Lash was the oldest of 10 children. His father died when he was 12, and he spent much of his youth caring for his younger siblings and running the household while his mother worked.

"I never really had a father, so I didn't really know how to be one," he said.

Lash's son is incarcerated in New Castle, serving time on drug charges. Had a program like Inside Out Dad been available to Lash earlier, he said, he thinks he may have been able to prevent his son from going down the wrong path.

Recently, offenders in the Inside Out Dad program were able to spend several hours with their children. The "Day With Dad" event included a cookout and outdoor games for the children and their fathers to participate in together.

"It was the first time (Mays) actually got to play ball with his boys," Bennett said.

The afternoon was a big eye-opener for Mays.

"I was watching my boy play ball, watching his skills," he said. "I had to ask, 'Where did you learn to do that?' Because I knew I hadn't taught him. It really hurt."

Mays called Inside Out Dad "a blessing."

"I'm able to show my kids I love them and to interact with them," he said. "From the time I got locked up, I've thought about them 24/7. I hated that they were going to grow up without me."

The program also stresses honest and open communication between offenders and their children.

"They need to know this is the consequence of being a criminal," Mays said. "I want to talk to my kids about drugs, safe sex and being responsible. They're taking heed of what I say."

Inside Out Dad brings the offenders' families into the loop. One of the first things participants have to do is contact their family members and ask what it would take for them to become a better father, son and brother.

"It gives the offender a chance to see things from their family's point of view," Bennett said.

Having a close relationship with his children in bittersweet for Mays. On the one hand he is filled with love for them, but on the other, he knows now what he is missing.

"Me not being able to really be there for my children hurts me," he said.

Bennett stressed that as of right now, participating in Inside Out Dad does not get offenders a time cut.

"I want to keep it that way," he said. "I want guys in this program who really want to be here."

Because of the Inside Out Dad program, Mays -- who is working toward a business degree -- said he would like to work with children in some capacity someday.

"I want to be a brother to them, someone they can always talk to," he said. "Whether they're black, white, polka-dot or candy-striped."

Lash just wants to fly right and be able to be a good father to his children after he is released.

"As you grow, you learn," he said. "I look back now, and I can say, 'I missed this, I needed this.' I was a baby raising a baby. But now, this is my responsibility."