The Cloverdale Clovers seventh grade volleyball team won the 2008 Putnam County Tournament. The Greencastle Tiger Cubs made the Clovers fight for their victory. It took three games and a narrow one-point advantage in the last game to win the tournament. Coach Cecily Combs and the girls had a great season. 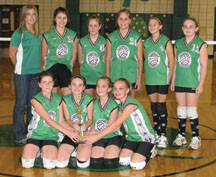