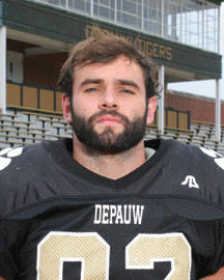 DePauw defensive end Alex Fitch has been selected the Southern Collegiate Athletic Conference Football Special Teams Player of the Week for his performance in the Tigers' 37-34 overtime win over Colorado College.

Fitch blocked a third quarter extra point and a fourth quarter field goal which allowed DePauw to force overtime with a game-tying score with 13 seconds left. The junior has blocked five kicks on the season. Earlier in the season he was selected to the D3football.com Team of the Week.

DePauw travels to Sherman, Texas, for a Saturday SCAC contest with Austin. Kickoff is set for Noon CDT with WGRE carrying the game live.