Weather has been good for state's apple harvest 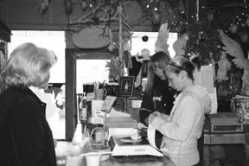 Kelly Cunningham and Dinah Kehrein sell a lot of apple cider at Kehrein's Apple House in western Hendricks County. On Tuesday a customer was stocking up with half a dozen gallons of cider. Greencastle residents are among their best customers.

BELLEVILLE, Ind. -- Cool weather means apples and cider to most Midwesterners and Putnam County residents are no exception.

"Greencastle is our number one customer base," said Dinah Kehrein, owner of Kehrein's Apple House. "We have regular Sunday and other day customers who come in for a caramel apple or apple cider slush every week."

The Apple House is a retail outlet for apples and other products. Their cider slushes are famous around Putnam and Hendricks Counties.

While many small orchards are closing down because of economic changes and lifestyle changes of their customers, some like Kehrein's continue to thrive.

They have been a family owned business for more than 25 years. Steve and Dinah Kehrein are the current owners. They took over the business from Steve's parents five years ago.

"I think we're beginning to see people going back. They want to bring their families back to the dinner table. It's been a world where everything is fast and easy but we are seeing people come in now who want their kids to have some of the experiences they had--like buying apples from the orchard," said Kehrein.

And, that's a good thing, as most western Indiana apple orchards pulled in a bumper crop this year, even after a late freeze last year destroyed as much as 80 percent of the apples.

Nearly 9.2 billion pounds of apples will be harvested nationally this year. That number is up slightly from last year but still below the nearly 9.9 billion pounds harvested in 2006, according to the U.S. Department of Agriculture.

Indiana's orchards are expected to produce 42 million pounds of apples this year, or about one-half percent of the U.S. crop, according to the Agriculture Department. Last year, the Hoosier apple harvest was 33 million pounds, down 40 percent from 2006.

The Indiana crop typically is worth $15 million to $20 million a year, according to officials at Purdue University's Horticultural Department.

The most popular varieties are Red Delicious, Golden Delicious, Jonathan, Gala, Rome and Fuji, which together comprise 70% of the trees in the state. The other 30% of trees is made up by some 95 other varieties.

Most apple orchards sell their crop directly to the public through on farm markets or community farmers' markets. Apples are a symbol of fall to many people, and a farm market draws customers not only to purchase apples, but also cider, other fruits and vegetables, and various items.

"This business has changed so much" in the past 25 years, said representatives from Martha's Orchard in Clayton. "It's really geared a lot more to entertainment."

There is a growing trend toward agrituourism by many of the growers. A number of them have discovered they can sell not only the product, but also the farm experience and activities such as petting zoos, corn mazes and school tours not only attract more customers, but also provide additional profit centers.

"Times have just changed unless you are in an area like Carmel. People just don't come out to the orchard like they use to, they don't cook or bake much anymore and they shop for apples at the grocery store," reports Martha's Orchid owners.

While they are not growing apples anymore, Martha's Orchard sells the fruit along with myriad of other products including fudge. They also offer catering, a tearoom, host weddings and bonfires and hayrides.

Many of the older orchards around Hendricks and Morgan counties have closed. Without entertainment like hay rides, mazes and even haunted houses, there is not enough customer interest.

However, places like Kehrein's Apple House still offer a quality product and good customer service. While they no longer grow their own apples they have a niche as a retailer.