A picture of Schenk taken at the time of the pageant.
Order this photo

The women who become Miss Indiana have a lasting place in the organization even after their reigns are over.

"The past Miss Indianas are important to the Miss Indiana Organization because they are us, our history, our heritage," said Terry Iden, the field director, judge's chair and historian for the Miss Indiana Scholarship Pageant program. "They stand as examples of outstanding Indiana ladies, women of accomplishment, as nearly all of them have gone on the make outstanding contributions to their home communities and the state of Indiana. They have written books, won awards. They are lawyers, teachers, politicians, recording artists, fundraisers. They are examples that the scholarships invested in them turned out great 'profits' to better our society by helping them to reach their educational goals. They have made the world a better place. We couldn't ask for more; we are proud of them."

One of those past Miss Indianas is Carolyn Akin Schenk of Greencastle, who took the crown in 1940. She was 19 years old when she won the title at the Grand Theater in Evansville. 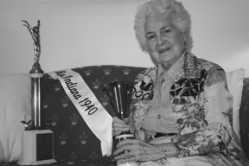 Carolyn Akin Schenk of Greencastle holds her awards from the 1940 Miss Indiana Pageant.
Order this photo

"I didn't expect to win Miss Indiana," Schenk, a petite woman with sparkling blue eyes and a perfectly coifed shock of white hair, said. "I had no idea what it was all about."

If she didn't know then, people now do, she has discovered.

"I have enjoyed the fact that no matter what groups I am in or what new friends I make, there is always someone who knows I was Miss Indiana," she said. "The knowledge of the fact continues to live on, and this always surprises me."

"Carolyn and I converse every so often -- she is a marvelous lady," said Iden. "She attends the state pageant every year if possible. She was not able to make it to state this past June, although she was registered for the alumni dinner and had tickets to the Saturday night show."

"Her Miss Indiana 1940 story is interesting because it shows how the Miss America pageant used to be grass roots; the little country girl could make it to Miss America," he said. "Carolyn is and was a beautiful lady who has the inner beauty that is rare."

Competition for the 1940 Miss Indiana title consisted of evening gown and swimsuit competitions, Schenk said. She was mortified when she found out she would have to prepare a talent for Miss America.

Just for the pageant, Schenk learned a tap dance routine. But she was never completely comfortable with performing it.

"It was pretty awful," she said, shuddering at the memory. "Just frightening. But I got through it, even though they had to lay me down when I was finished."

While the talent was her least favorite part of the Miss America Pageant, being in the parade was on of Schenk's favorites.

"The ride in the Boardwalk parade on the float was thrilling with the applause of the spectators who lined both sides of the Boardwalk," she remembered.

She also recalled that she and her fellow contestants were under constant watch.

"We were guarded and chaperoned everywhere we went," she said. "All of the contestants were beautiful and friendly ladies. The entire experience was awesome."

For Miss Indiana, Schenk wore a dress her mother made for her for the evening gown portion. When she won the state title, she was awarded $200 to spend on a wardrobe -- and was able to purchase two formals, two suits, and shoes, gloves and purses with the money.

"The girls are so much better dressed today," she said. "And the pageant is a lot more about talent than it used to be."

At a Miss Indiana alumni luncheon in 2000, Schenk pulled out the swimsuit she wore at the 1940 competition, an act Iden recalled as one of his "favorite surprises."

"A mug with a picture of Carolyn and me sets by my computer, a picture of the first time we met in 2000 -- in the hotel lobby in Terre Haute," he said.

And for Schenk -- who keeps several scrapbooks containing mementos of her short pageant career and can still tell a story about every photo -- being a former Miss Indiana is still a source of great pride 68 years later.

"I am proud to have been chosen Miss Indiana 1940," she said. "I consider it to be an honor. It continues to be a delightful part of my life."