Students safe after fire near DePauw 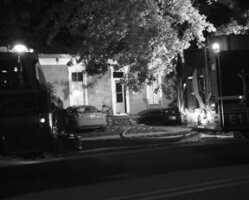 Greencastle firefighters respond to an attic fire at 303 S. Jackson St. Wednesday evening. The fire forced DePauw students out of their home and caused $5,000 in damage. No one was injured.
Order this photo

Several students from DePauw University escaped unharmed Wednesday evening when fire broke out in the home they were renting near campus.

Students living in the home at 303 S. Jackson St. in Greencastle reported seeing a brown spot on the ceiling, smelling something burning and hearing crackling in the attic before calling 911.

Doug Strodtman, a senior at DePauw, told the Banner Graphic he was living in the house with Lukas Schooler, also a senior at the university, and Dustin Funk, a fifth-year intern with DePauw. The house is owned by Steve Modlin.

The men said they were using several space heaters in order to heat the home and had tripped a circuit breaker several times prior to the fire.

Fire Chief Bill Newgent told the Banner Graphic the students had reported the problem to their landlord earlier in the day and were told an electrician was going to be out to investigate. But before that could happen, the fire broke out.

"We talked to the landlord and told him we were vacating the house tonight for fear of a fire," Strodtman said.

Fortunately firefighters arrived on the scene and were able to extinguish the flames before they spread beyond the attic.

"The guys were able to make access to the attic and put out the fire very quickly," Newgent said.

He estimated the fire did about $5,000 worth of damage to the home in addition to about $1,000 damage to the occupants' belongings. The students are now staying with friends on campus.

The house was equipped with smoke detectors, but the students said they were not activated by the fire.

Newgent told the Banner Graphic that he personally checked the detectors and that they were in fact working. However, he said they may not have been activated because the fire was in the attic.