Special teams, field position will be key for Cougars 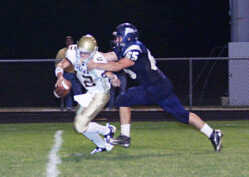 Over the last three years it could easily be said that North Putnam has owned Speedway. In five previous meetings, the Cougars are 5-0 and have outscored the Sparkplugs 148-82 over the course of those games. But the one thing that one can say about sectional football in Indiana is to expect the unexpected.

The Cougars had allowed only 22 points in seven games before giving up 32 to the visiting Sparkplugs back on Oct. 10. The North Putnam offense was working well with Griffen Dahlstrom rushing for 147 yards and Scott Hunt passing for 75 yards and two touchdowns.

The one thing that crippled the Cougars in their first meeting was turnovers, in particular fumbles. North Putnam put the ball on the turf and head coach Greg Barrett acknowledged that it played a major factor in the game, but he's been pleased with his team's performances over the past weeks.

"Without a doubt," Barrett said regarding fumbles playing a factor. "I think you could say that turnovers played a key. We put the ball on the ground six times that game, they threw some interceptions, had a fumble, but I think for us we need to focus on the task at hand, play-by-play. Don't let the little things get to us; don't turn the ball over and no stupid penalties. If we play the way we've been playing the last couple weeks, we'll be OK."

In their meeting, Speedway's Kyle Linville had a monster game. In addition to rushing the ball for 71 yards, he caught three passes for 81 yards and a score. Senior fullback Jaron Avance also had a big game, scoring three times as well as junior Michael Hubbard who caught five balls for 61 yards and a touchdown. Barrett noted that those will be three guys the Cougars will be keyed in on, but that Speedway is a team full of talent and he ready to lace them up and let the battle begin.

"That's a good team we're facing has got some weapons that we'll definitely have to keep an eye on, which we all know that (Kyle) Linville kid is special kid. (Jaron) Avance and (Michael) Hubbard kids are all good runners," Barrett said. "It's not obviously something new to our kids. They've done it six times in three years facing these kids. We understand what we need to do; I think the kids understand that and you know, it's here.

"I don't think another day of practice will help us -- so let's get it on," he added.

Barrett expressed that he felt as in every game field position and ball control will be crucial. "I think field position is going to be huge," he said. He believes that both the Cougars and Sparkplugs are in good places right now and that he's ready for the game to begin. 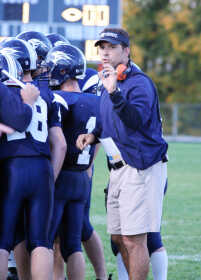 An added bonus for North Putnam was the return of wide receiver and return man Jarrett Ban to the practice field. Barrett hopes he'll see some action tonight.

The Cougars know what to expect from the Sparkplugs, so it will come down to the intangibles. They will look to use their two-headed attack of the passing and rushing game to take down Speedway.

"We're definitely going to have been able to rely on both, get the run game going and have the passing game there. They're going to blitz, they're going to come after us and we need to try to keep them as honest as possible and that will be our game plan. It will be a lot like the first time we faced them. We knew what to expect and now it comes down to executing," Barrett said.

In their 35-0 win over South Putnam last weekend, Barrett liked what he saw on the game tape. The Cougars established themselves on both sides of the ball and come out on fire, which Barrett hopes they can do again tonight.

"I thought last week when we played South Putnam we were extremely explosive on our first two drives. We looked fast and we executed well. Our offensive line played very good that game and that's the key to our success offensively. Defensively, our line played very well as well," Barrett commented.

North Putnam is known for their explosive offense and a punishing defense, but when asked what he believed the game would come down to in the end, Barrett singled out two essential elements.

"I think this game will come down to field position and special teams," Barrett said.

North Putnam travels to Speedway for 7 p.m. kickoff tonight in the Class 2A #30 Sectional semifinal.