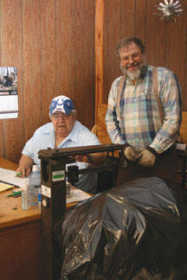 Nearly 1,000 pounds of aluminum is processed every week at the non-profit Retired Senior Volunteer Program (RSVP) Recycling Center in Greencastle.

The facility is manned by volunteers and is the highest revenue producer in the three-county area of Putnam, Clay and Vigo served by the RSVP.

"We started out about 30 years ago over on Franklin Street. The county moved us behind Comprehensive Services. Actually, we moved there twice. When they expanded the county let us move here," reported RSVP volunteer Frances Washburne.

While summertime tends to be a little busier for the recycling center, they have a lot of regular customers.

Those bringing in cans for recycle are paid by the pound for the aluminum only cans.

"They need to be clean and dry when they are brought in. Right now we are paying 50 cents per pound, but that amount varies. Last week it dipped twice," said William Wicklund.

Another recycling regular is George Weaver, who brings in cans and collects the money for them for Habitat for Humanity.

He expressed some concern at the lowering price for the material.

"I guess now that gas is half of what it was I'm not wasting any of it when I drive over," he said after learning that the price per pound for the cans was ten cents less than this time last year.

"A lot of people are changing over to plastic bottles. That uses oil but people still buy the plastic," said Betty Kendall, who is another regular customer at the center.

"I don't have as many cans as I use to, either, since my kids are grown and I have diabetes," she added.

The actual process is a fairly simple one. Cans are brought in, weighed and then emptied into a machine that crushes them. They are then blown into a semi trailer and stored until it is full. Once the trailer is filled a vendor in Evansville comes and picks it up and the process starts anew.

The Recycling Center is open on Wednesday and Saturday mornings, weather permitting.

"If it is 10 degrees out or the wind chill is minus 10 degrees we don't open. I live in Cloverdale and William lives in Fillmore, so if the weather is too bad we might not be here. People should call our cell numbers ahead of time to make sure we are here," added Washburn.

Frances Washburne checks to made sure smashed aluminum cans are aimed at the back of the semi truck as they process cans dropped off at the recycling center Wednesday.

Most aluminum cans are accepted if they are clean and dry.

"Sometimes we get cans that have been picked up from the roadside and get rejected because they are full of dirt and mud and weight too much," said Washburne.

The center does not accept steel cans, white-coated cat food tins or trash. Payment is made on the spot.

According to a report from the Environmental Reporter, "Nearly 100 billion cans were produced in the United States with 49.9 billion of these recycled, some 1.48 billion pounds, according to a statement by the Aluminum Association Inc., the Can Manufacturers Institute, and the Institute of Scrap Recycling Industries Inc.

For 22 out of 23 years, the rate has equaled or exceeded 50 percent, the three industry groups, adding that the aluminum beverage can is 100 percent recyclable back into new cans indefinitely.

The groups said the aluminum can is "by far" the most recycled consumer beverage package in the United States, amounting to twice the recycling rate for beverage packages of other materials.

The aluminum industry paid about $800 million for the used aluminum beverage cans.

The RSVP Recycling Center is open on Mondays and Saturdays from 9 a.m. to noon. They are located on Keightly Road behind the Putnam County Jail.