By MOLLY MCLAUGHLIN For the Banner Graphic 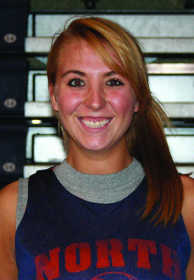 CRAWFORDSVILLE -- The first game of the season is always one of nerves and anticipation of what the rest of season may hold. For North Putnam varsity girls' basketball team, it is going to be hard work and communication.

North Putnam immediately looked like they needed to be brought back to life. Taylor Alles jumped and gave the Cougars the first possession, which ended in a turnover. Turnovers and errors were common themes of the night.

Crawfordsville scored first but didn't have too much success against the Cougar defense. With 5:06 left in first quarter, the score was Crawfordsville 4, North Putnam 0.

In the second quarter, North began with possession of the ball. Shelby Frye hit a three pointer with 6:10 left in the period.

One of the major downfalls of the Cougars was the fact that they let Crawfordsville's Mandi Johnson shoot undefended.

The first half of the game ended with Crawfordsville leading 34-14.

Early in the third quarter, North Putnam had numerous turnovers that allowed Crawfordsville to build their lead so that the Cougars had to play catch up.

The same happened in the fourth quarter even though North Putnam utilized their bench through out the entire game substituting their players, allowing many of their younger players get varsity playing time and trying to find a winning combination but the attempt failed.

North Putnam cleared the bench late in the fourth quarter and this seemed to help the Cougar score improve. However, it wasn't enough and Crawfordsville won the game 64-33.

"If we would've had fewer turnovers and more shots fall, the game would have been a completely different story. I thought our girls did really well off the glass with rebounds. I was also glad that our younger girls got to experience varsity play, I just wish it could have ended differently for us." Cougar head coach Kevin Smith said after the game.