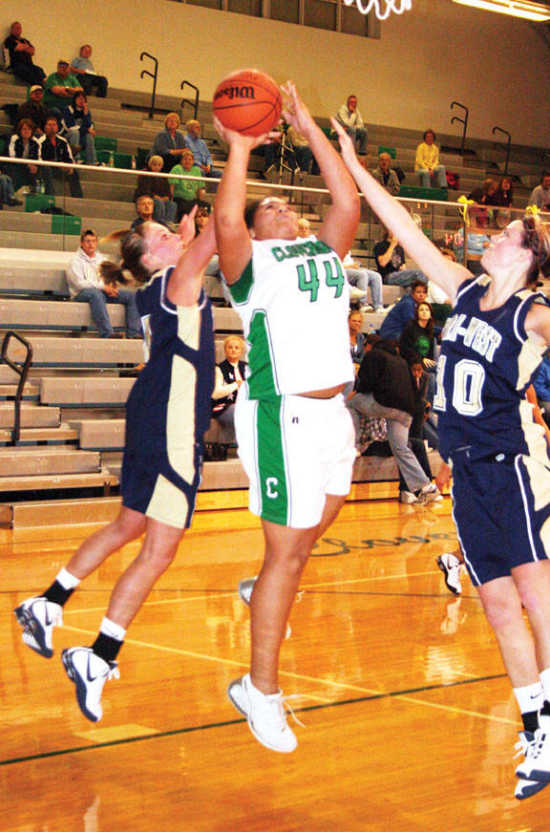 CLOVERDALE -- The first half of Tuesday's opening contest for the Cloverdale Clovers was a struggle. A pressuring Bruins squad forced the Clovers into multiple turnovers, which resulted in a halftime lead Cloverdale was unable to overcome. The Clovers (0-1) fell to Tri-West 60-46.

With a squad that was comprised of four seniors, two juniors and one sophomore, is was clear the team was still trying to find itself much like any other in its opening contest of the year.

Cloverdale opened the game hanging close to the Bruins despite an impressive first quarter performance from Sam Ricks. Ricks put in 10 of Tri-West's 15 first quarter points and looked to be a force the Clovers would have little answer for.

CHS stayed close in the opening quarter with Kristin McCammon dialing in two bombs from long range. Allie Franklin accounted for the other two Cloverdale points. Tri-West held Elizabeth Cheatham to only one shot attempt in the opening quarter, but the senior would get on track as the game wore on.

Cloverdale doubled up its score before the half and entered the locker room down 33-16, but a halftime talk by head coach James Wade would spark a second half resurgence.

When asked after the game what he saw out of his team, Wade noted the fact the team is still trying to become familiar with things and that the Bruins forced them into some ill-advised decisions.

"I saw we're still learning our offense," Wade said. "They put a lot of ball pressure on us. They're a good defensive team and we didn't handle it well. Because of that we started getting frustrated and began settling for shots we probably shouldn't shoot. We could never really get anything going."

The Clovers come out of the locker room with more energy and took control of the game in the third quarter. They outscored Tri-West 17-8 and cut the Bruin lead to eight heading into the final quarter. Cheatham found her form in the third, connecting on 4-of-6 shots from the floor and added two from the charity stripe to lead the Clovers.

Their defense also rose to the occasion and held Ricks to just two points in the quarter.

The fourth started with back-to-back buckets from Franklin and Breegan Andersen. With the hoops, Cloverdale closed to within four points at 41-37. Two free throws from Kayla Shepherd closed the gap once again to four after a Ricks basket. That would be the final charge the Clovers would make.

Tri-West continued to capitalize on turnovers and second chance opportunities as the quarter went on and held on to get the win 60-46.

"I saw a group of girls that didn't quit," Wade commented. "In the second half they played so hard and we got within four at one point. We just couldn't climb back out of it."

Wade also acknowledged the team didn't come out quite like they wanted to, but after making some adjustments they found their way.

"I think we came out a little flat. We didn't rotate on our zone, we were slow rotating on our zone and No. 10 (Ricks) knocked down some shots, she score 10 of the first 15 points and we didn't find her when we needed to," Wade said. "I think we started to doubt ourselves and we had a good talk at halftime and they came out and they played the way they know they can play. They fought and got themselves back in it."

Next game -- The Clovers will look to rebound against Union Dugger tomorrow at 6:30 p.m.