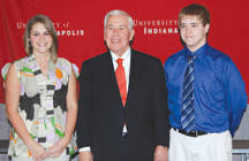 INDIANAPOLIS -- More than 400 high school juniors and 121 accompanying adults attended the 32nd annual Richard G. Lugar Symposium for Tomorrow's Leaders held Dec.13 on the campus of the University of Indianapolis.

Held each year since he has been in the Senate, Lugar opened the Symposium speaking and answering students' questions. During his address, he discussed the current economic situation and its international impact. Lugar then fielded a variety of questions from the student participants.

"We gather at the University of Indianapolis each year to discuss serious themes because the responsibility for how it all comes out is most likely to lie in generations down the trail rather than in the specific times in which we live," Lugar said. "That is why we gather two outstanding students from most of the high schools and preparatory schools in our state. They will be leading our communities and businesses, and even our state and country, in the near future and will face many of today's issues."

Just before his speech, Lugar presented the inaugural Richard G. Lugar Distinguished Student Leadership Award to Katie Felix, a 2007 Symposium participant and senior at Perry Meridian High School. The award is given by the University of Indianapolis' Lugar Center for Tomorrow's Leaders, the permanent home for Lugar's annual symposium. The new center provides extended experiences for high school and college students that expose them to leadership opportunities, the value of leadership in service to others, issues of ethics and integrity in leadership and the qualities of strong leaders. Building on the university's core values, the center will reinforce the value of a liberal arts education in preparing young people to be tomorrow's leaders.