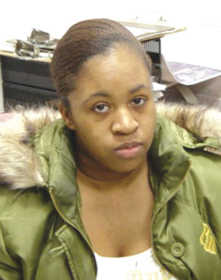 PUTNAMVILLE -- An Indianapolis woman was arrested Thursday for attempting to traffic with an inmate at the Putnamville Correctional Facility.

Lakeisha S. Kimbrough, 24, was at the prison to visit Brian D. Eines, 24, who is serving a 10-year sentence for an unlawful possession of a firearm by a serious felon charge out of Marion County.

Prison staff had been alerted that Kimbrough might attempt to traffic with Eines, a release from the prison said, so the visit was closely monitored.

"Correctional staff did observe Kimbrough pass something to Eines during the visit and notified supervisory staff," the release said.

Eines was searched at the end of the visit. On his person, staff found two cell phones, marijuana, tobacco, a phone charger and rolling papers.

Kimbrough was placed under arrest and charged with trafficking with an inmate and possession of marijuana, both Class A misdemeanors. She was arraigned Friday morning, and her bond was set at $5,000 with 10 percent allowed. As of Friday afternoon, bond had still not been posted.

Kimbrough's next court date is scheduled for May 1.

Eines may face disciplinary action and additional outside charges. His projected release date is May 16, 2013.

"We would not have the ability to catch those attempting to break the law in our facilities with out the diligent efforts of staff," said Putnamville Superintendent Bruce Lemmon. "I commend the correctional officers for their excellent security practices, and, hope that this serves as a lesson to those contemplating trafficking in the facility."