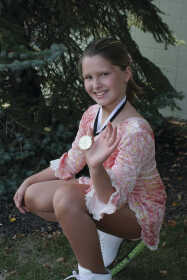 Taylor Selten shows off the gold medal she won this fall at the Indiana State Championship. Even though she has only been skating since May she has accomplished a lot even skating as a troupe member in the Christmas on Ice Show in Indianapolis.

Like many 11-year-old girls, Taylor Felten loves Bratz and Barbie dolls, but she has found something she loves even more -- competitive ice skating.

Taylor, a fifth-grader at Bainbridge Elementary, spends the at least two weekends out of every month ice-skating at the Carmel Ice Skadium.

She began skating last May. She has placed first and gold in the Tony Todd Invitational, The Indiana State Championship and the Winterfest in Carmel. She recently skated as a member of the troop in the Christmas on Ice Show in Indianapolis. She skates with the Indianapolis Skating Club of Indiana and is hoping to eventually train for the Olympics.

Their stepfather took Taylor and her brother Brandon Felten to the Ice Skadium one weekend. Taylor hit the ice and fell in love with skating. 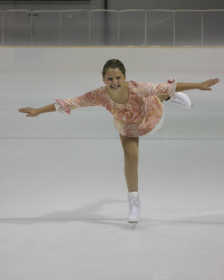 Taylor Selten, Bainbridge demonstrates some of her skating techniques. The eleven year-old is a fifth grader at Bainbridge Elementary School.

During that outing, she began following and imitating Millikan, who was skating at the rink. She caught the Olympian's eye, and Millikan later approached Taylor's mother Treva Price.

"Who belongs to this one?" said Millikan, asking how long Taylor had been skating. She was amazed to discover it was Taylor's first ice skating experience.

"Take her out of here or I get to teach her. She is amazing me," Millikan said.

Taylor began taking lessons on the weekends and over the summer when she visited her mother in Carmel. She eventually began training with Heddle, who is known as the "ice whisperer."

"She takes lessons and practices for four or five hours each Saturday and Sunday. Here is this little girl from the middle of corn who has fallen in love with ice skating," said Price.

Price works as an accountant during the day and has taken on a second job in the evenings to help pay for the lessons and competitions for her daughter.

"It's hard sometimes but I wouldn't trade a minute of it," said Price.

Taylor's father, Bill Felten, who lives near Heritage Lake, is also 100 percent supportive of his daughter.

"Her dad can't even look at her without getting tears in his eyes. He is just amazed at her ability," said Price.

And her brother Brandon, a North Putnam Middle School student, carries her luggage and supplies.

"Brandon is happy to wait in the shadows. Sometimes we have lots of 'do withouts' but he doesn't seem to mind. I am pretty sure he is calculating future endorsements," joked Price.

The first time Taylor competed, Brandon prayed for her to win.

"See it does work," he told his mother.

Even though Taylor started late with skating (most kids begin by age 6) and only gets to the ice every other weekend, she is learning very quickly.

"She walks out on the ice and it's as though she never left," said her coach.

Ice-skating presents an image of effortless grace, but in fact it takes strength, balance, flexibility and even pain sometimes. When Taylor skates she goes somewhere beautiful.

"It has to be a beautiful place because you can see it in her face," smiles Price.

Taylor told her grandmother she feels the moves in her heart and can see them in her head. Her coach believes that helps her with her ability to retain moves and to perform them perfectly during practice.

Taylor is hoping to take on the triple axel in the next six months. This is a difficult figure skating jump with a forward take-off. It has an extra one-half rotation in the air due to that take-off. A double axel has two and a half rotations and a triple has three and a half.

After Taylor won her first gold medal she whispered to her father, "Next time it will be a real one."