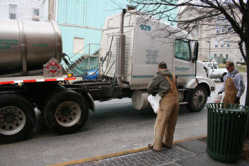 Perry Siddons and Jamie Ensor were throwing salt underneath this semi to help give it traction to get up the hill on N. Jackson Street in front of the Banner Graphic around 1 p.m. Tuesday.

Yet another bout of ice gave area drivers fits on Tuesday afternoon and evening.

As of 6:20 p.m., Sergeant Richard Myers of the Putnamville state police post reported that Putnamville officers had worked 32 crashes and slide-offs in the area.

With conditions as they were, Putnam County Commissioners issued a Level 2 Hazardous Transportation Warning at about 2:30 p.m.

Crashes made movement nearly impossible on either I-70 or U.S. 40. Myers reported that I-70 in Putnam County was "still covered in ice and very slick."

Westbound I-70 in the county was stopped at the 45 mile-marker due to slide-offs and crashes in the area.

Additionally, U.S. 40 eastbound approximately one mile west of U.S. 231 was blocked by crashes.

Dara Robinson, evening shift supervisor for Putnam County dispatch, said 51 wrecks were reported between 11:24 a.m. and 3 p.m. All but one -- an overturned State Highway Department truck filled with sand -- were minor slide-offs or collisions. Medical personnel were dispatched to two of the accidents, but no serious injuries were reported.

Robinson said cars and trucks were having trouble getting up the hills and negotiating curves in the areas of U.S. 40 in Putnamville, Tesmer's Corners on Manhattan Road and Plessinger's Hill.

"The county and state are doing the best they can to get the situation under control," Putnam County Planner Kim Hyten Tuesday. "But right at the moment, it's a losing battle."

Hyten feared the ice would cause power outages.

"I'm not sure we're going to get above 32 degrees today, so I really don't know what's going to happen," he said.

According to the weather forecast of the Associated Press, though, conditions were expected to improve in the overnight hours. While the chance of precipitation remained 100 percent, temperatures were expected to rise slowly overnight, with the freezing rain changing to rain.

Today's forecast calls for highs in the 40s with a mix of rain and snow, but no accumulation.

Comments
View 23 comments
Note: The nature of the Internet makes it impractical for our staff to review every comment. Please note that those who post comments on this website may do so using a screen name, which may or may not reflect a website user's actual name. Readers should be careful not to assign comments to real people who may have names similar to screen names. Refrain from obscenity in your comments, and to keep discussions civil, don't say anything in a way your grandmother would be ashamed to read.
Respond to this story