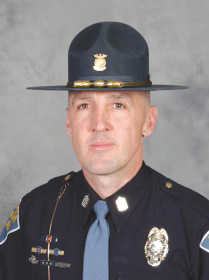 PUTNAMVILLE -- Indiana State Police Superintendent Paul Whitesell, Ph.D., announced the promotion of F/Sgt. Dan Jones to the rank of lieutenant to serve as commander of the Putnamville State Police Post. Jones received this promotion through written testing and a competitive interview process.

Jones has previously served on the departments USRT (SCUBA), TIP (Tactical Intervention Platoon) and CISM (Critical Incident Stress Management) teams and is a recipient of the Combat Action Award.

Jones graduated from Van Buren High School in 1982 and obtained an associate's degree in criminology from Vincennes University in 2000.

From 1984 to 1987 Jones served on active duty in the U.S. Marine Corps with the Second Marine Division at Camp Lejeune, N.C. and the First Marine Air Wing in Okinawa, Japan and Subic Bay, Philippines as a military policeman where he attained the rank of sergeant.

After leaving the military, Jones worked as a correctional officer at the Putnamville Correctional Facility and the federal prison in Terre Haute until his acceptance to the State Police Recruit Academy.

Jones has replaced Lt. George Schneider, who commanded the Putnamville Post from 1980 to 2008. Schneider has accepted a position as field enforcement commander for the Indiana State Police Commercial Vehicle Enforcement Division.

Jones is the son of the late Thomas and Martha Jones. He has three children and is married to Deanna, a State Police detective assigned to the Putnamville Post. They reside near Raccoon Lake in Parke County.