'Blending wall' stands in the way of ethanol growth 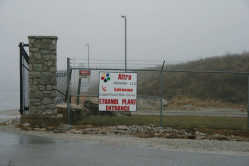 Altra Biofuels in Cloverdale shut down production earlier this month. Ethanol producing plants that have remained open may still face problems due to an imposing wall of federal regulations and market conditions.

The closing of the Cloverdale Altra Biofuels may be a sign of the times for the renewable fuels industry--at least for ethanol.

In early December the company released official statements announcing layoffs in both Cloverdale and in Coshocton, Ohio.

Regarding the Cloverdale closure, the release read, "Due to the poor margin environment, we have made the decision to stop producing ethanol at our Cloverdale facility. We have and will continue to monitor the margin environment on a daily basis and will assess a restart of the plant as soon as margins improve."

The industry now must get past an imposing wall of federal regulations and market conditions if it hopes to grow, said a Purdue University agricultural economist.

Unless the barrier is removed, ethanol production could level off by 2010, Tyner said. The blending wall refers to the amount of ethanol gasoline companies are permitted to blend with petroleum-based fuel. Federal standards set the amount at 10 percent of gasoline consumption.

"We're not at 12 billion gallons yet, but we'll be there in 2009 or 2010. When we hit that blending wall, the Environmental Protection Agency cannot require gasoline companies to blend more ethanol than they are legally permitted to blend."

There are too few cars and trucks on the nation's roads capable of running on any gasoline with an ethanol blend higher than 10 percent, or what is commonly called E10, Tyner said.

A huge gap exists between the E10 fleet and flex-fuel vehicles that run on E85 - an 85/15 ethanol to gasoline blend, he said.

"Only about 7 million of our nation's 300-plus million cars are E85 flex-fuel vehicles," Tyner said. "Also, we have just 1,700 fuel pumps in the entire country that can dispense E85, and most of those are in the Midwest. All of the E85 that's marketed nationwide could be produced by one ethanol plant."

Some in the ethanol industry have proposed that E10 be replaced by an E15 or E20 blend, thereby increasing ethanol use. However, automobile manufacturers do not believe today's E10 vehicles can run on a higher ethanol blend, Tyner added.

"Because the automobile fleet in the United States turns over about every 14 years, it would take some time before E15 or E20 cars would be as common as E10 are now," he continued.

Ethanol production growth also is held back by environmental and infrastructure factors.

"In the South during the warm summer months, the vapor pressure of ethanol blends is higher than conventional gasoline," he said. "That causes more evaporative emissions and means the blended fuel does not meet Environmental Protection Agency evaporative emission standards.

"On the infrastructure side, ethanol cannot be shipped by pipeline because it is so corrosive and would absorb any water in the pipeline. It must move by truck, rail or barge instead. That presents logistical problems."

For ethanol production to push past 12 billion gallons per year the blending wall would have to be eliminated and oil prices would need to increase, Tyner said.

The blending wall affects corn prices, as well, by cutting the link between the corn price and the cost of crude oil, Tyner said. In the ethanol era, corn prices have followed oil prices up and down.

"In the economic models we've developed, corn prices never exceed $6 per bushel with the blending wall in place, even with oil prices at $160 per barrel, because you simply can't blend any more ethanol," he said.