For 10 years, the members of the "French Fry Club" have made it a point to get together and do something most people might consider crazy for New Year's Day.

They go for a motorcycle ride.

Rain, snow, sleet or just downright cold -- it doesn't matter to this group of local riders. 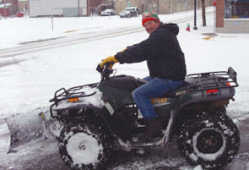 Ron Rose clears the Greencastle Custom Cycle driveway of snow prior to the 2005 ride.

"It's a good-luck superstition," said Lisa Eaton, who owns Greencastle Custom Cycle with her husband Scott.

The riders will meet on Thursday at 1 p.m. at Greencastle Custom Cycle, which is at 200 N. Indiana St., Greencastle. There is no cost.

"It's just about friends getting together for a fun afternoon," Eaton said.

While the Eatons, their friends and customers have organized many charity motorcycle rides in the past, this ride is more about tradition and good luck.

On the trip, the riders generally travel to a restaurant and have a meal together. The club got its name a number of years ago on one of these trips.

They visited a local drive-through, knowing that the manager, who was a friend, wanted to be on the ride with them that year. Because she had to work, they went to her restaurant as a way of teasing her.

To get even, she handed each rider a single french fry from the drive-through. The name has since stuck.

According to Eaton, though, the ride's biggest attraction is the friendship. While she and Scott are the owners of Greencastle Custom Cycle, she said she sees their customers, who make up much of the New Year's ride, as much more.

"You can call them customers, I know, but we look at them as friends," Eaton said.

A ride on New Year's Day, which certainly isn't the best holiday for a motorcycle ride, is a sign that the group is willing to stick together.

"If we're crazy enough to come out together on the cold first day of the year, then we can stick together through the year," Eaton said.

The ride is also for luck. Eaton said that in the years they've been doing the ride, they've cancelled for weather just once. During that year, some difficult times befell several members of the group. They don't plan to miss any rides anytime soon.

French Fry Club members line up their bikes in front of the Monon for their 2006 ride. On that afternoon, the riders were braving sub-zero temperatures to carry on their yearly New Year's Day tradition.

Eaton said one year the group's mettle was especially tested. At the time the ride was to start, the temperature was two-below zero. Undeterred, they rode the several blocks to the Monon to have coffee together. They lined their bikes up in front of the restaurant, and passersby showed their support of a group braving the cold on motorcycles.

"You cannot believe how many people came by honking. It was totally cool," Eaton said.

One of the riders actually ordered two cups of coffee -- one to drink and one to put his hands in.

When they had finished, they rode back to the shop and the ride was finished.

"You just grin and bear it and laugh," Eaton said.

"It's just a community event," she said.

As to this year's weather, the club looks as though it may get lucky. As of press time, the forecast calls for temperatures in the mid 30s and no precipitation.