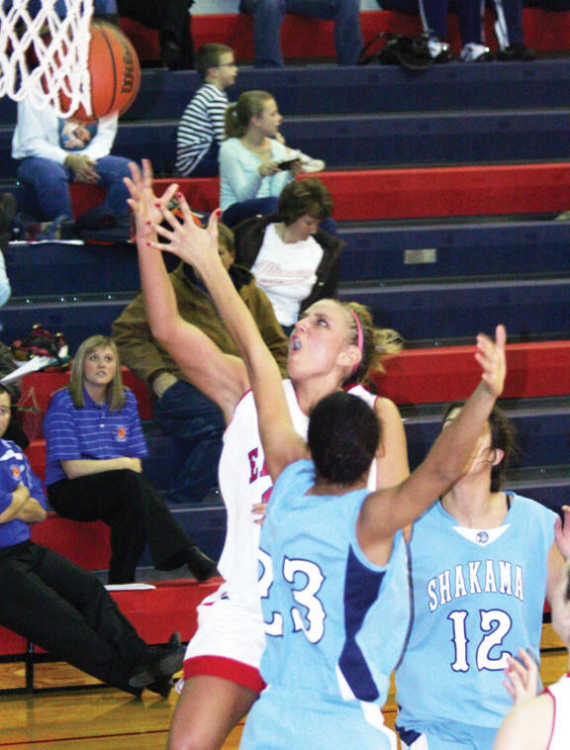 South Putnam's Oceaia Boetjer powers her way to the basket during the Eagles' game against Shakamak Saturday. South defeated Shakamak 47-30, then defeated North Vermillion 39-30 for the title.

GREENCASTLE -- Only time will tell if Saturday afternoon was the start of a successful second half run for the South Putnam Eagles, but a pair of wins to claim the championship of the Eagle Holiday Classic was a good beginning.

The Eagles won their tourney opener, 47-30 in the morning against Shakamak to advance to the final where they pounced on the Falcons in the third quarter to win a 39-30 decision and the title.

"We really played well today," coach Debbie Steffy said. "The last time we played was Dec. 19 and we've had some good days of practice. We did a lot of hard work over break."

The Eagles' defense was the driving force behind an 18-2 advantage in the third quarter that turned an 18-16 deficit at the half, into a double-digit lead heading into the fourth quarter.

South Putnam came out of the locker room and wasted little time knotting the score as Leeah Butts wrestled down a rebound and scored on the put back for an 18-all tie. Butts, who did much of her damage in the second quarter, sparked her team with all seven of her points in the middle two periods.

With a tie score, Emily Dabkowski gave the Eagles a lead they wouldn't relinquish when she calmly sank a 3-pointer from the corner on the next possession.

"We came out of the half and hit two shots, one of them was a 'three' and we got some confidence," Steffy said.

Playing with their first lead, the Eagles' defense stifled North Vermillion, grounding the Falcons in a one-for-nine shooting performance.

Senior guard, Oceaia Boetjer's lightning-quick speed with the ball, and on defense, was a constant source of frustration for North Vermillion.

Dribbling through and around defenders, Boetjer followed Dabkowski's second bucket of the second half with a driving lay-in for a 25-20 advantage. Jessica Thompson fired home a long 3-pointer before Boetjer took over.

Falcon defenders chased the senior point guard all over the floor, but were left in the Eagles' jet stream as she flashed to the hoop for another score and a 30-20 South Putnam lead. Boetjer followed that with a pair of free throws after being fouled on another drive and then took the ball the length of the court off a rebound and slashed to the hoop for a 34-20 lead.

Just as important in building that 14-point lead heading into the fourth quarter was zero turnovers in the third period for the Eagles.

"We took care of the ball and were able to get some scores and take time off the clock," Steffy said.

North Vermillion wasn't about to go quietly however.

The Falcons began trapping the ball on the defensive end and were able to chip away at the Eagles' lead in the fourth quarter.

Derryn Axtell opened the scoring with a free throw followed by a jumper from Bethany Chew with 3:04 remaining.

Two more free throws from Casey West, a score from Hillary Lively and a steal and lay-in from Axtell with 1:25 left and suddenly narrowed the lead to just 35-30.

Jenny Thompson stepped up to hit a key shot for the Eagles and Boetjer capped a 15-point game with two free throws to cement the victory for South Putnam.

"We talked at the start of the day about wanting to get to the championship game," Steffy said. "But when we got here we wanted to take care of business."

The Eagles improve to 5-6 overall and face Eminence at home on Thursday.