BAINBRIDGE -- Joe Hess got an extra Christmas present this year. He appeared before the Bainbridge Town Council in mid-December hoping someone would come up with a plan to save the restaurant his father opened in 1936.

He got his wish. The Bon Ton Restaurant will celebrate its 73rd birthday on Saturday, Jan. 24 with cake and the Bon Ton Deluxe special -- a double bacon cheeseburger with special sauce. 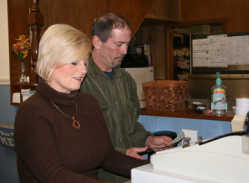 Bon Ton Restaurant owners Sue and Mark Blake are counting on support from the community in keeping the 73 year-old business open. The restaurant nearly closed after being on the auction block in December. An outcry from local residents encouraged the Blake's to undertake operating the restaurant.

New restaurant owners and Putnam County residents Mark and Sue Blake took over running the restaurant after it went on the auction block last December.

The Blakes' relatives purchased the Bon Ton but knew they didn't want to run a restaurant. They offered it to Mark and Sue, who had both worked in restaurant management and wanted to get back to it.

"Now was a good time for us to take over the restaurant. Our four kids are grown and three live out of state. We were ready to try it," said Sue.

The couple both work fulltime jobs outside of running the Bon Ton, but hope to eventually work only in their restaurant.

"We have a great staff. They are behind us 100 percent. They keep things running all week and Mark and I are there on the weekends," said Sue.

Their son Michael has begun working at the restaurant, following in his parents' footsteps.

"He wants to start learning restaurant management and this is a good way to start," said Sue.

And, even though their three daughters Whitney and Lindsey Briones and Tabitha Lucas all live out of state, they are offering ideas, suggestions and support to their parents. Lindsey is even designing new menus.

Besides the Blakes, the restaurant employs six staff members who are all local residents. Raye Hites, Phyllis Harmless, Mindy Robbin, Nellie Conrad, Moleigh Reed and Melissa Yeagley have all worked for the Bon Ton and plan to stay on with the new owners.

The Bon Ton has it share of regular customers like Joe Blaikie, Mike Clifford and Stewart Russell. The men sit at a community table in the center of the restaurant.

Russell was celebrating his 70th birthday. He generally eats both breakfast and lunch at the Bon Ton.

"The chair at the end of the table is his," said Sue. "Occasionally someone else sits there but most of us know that is his spot," she laughed.

They have lengthened their Sunday hours so people have a place to come after church. A new fried chicken special has been added to the Sunday menu in hopes of enticing more folks in the doors.

"Hopefully, in a couple of months we can extend the restaurant hours," said Sue.

Homemade pies are one of their specialties. They also offer homemade meals of fried chicken on Sundays and fried catfish on Friday nights. They have a breakfast menu that includes everyone's favorite morning foods with items like biscuits and gravy, eggs and bacon, sausage and hotcakes.

Their lunch menu has meatloaf and beef manhattans and all the standard sandwiches. Some people say the star of the Bon Ton is their Bon Ton Deluxe Special. Others insist it is the delicious baked fresh everyday homemade pies. They even offer sugar free pies. 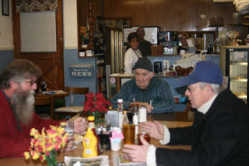 Joe Blaikie, Mike Clifford and Stewart Russell sit at the community table in the Bon Ton Restaurant. The three are regular customers. Russell was celebrating his 70th birthday at the restaurant that will turn 73 next Saturday.

The Bon Ton had been for sale for several years and eventually was auctioned off. However, there was no interruption of service in the restaurant when it was sold.

Gene Hess opened the Bon Ton in January 1936. At that time, Bainbridge had a lot of traffic running through the town on U.S. 36.

Hess, who was then in the construction business, built the building where the Bon Ton now stands, and the restaurant was back in business.

When it appeared that the Bon Ton was closing, there was an outcry among Bainbridge residents to keep the restaurant open.

"I hope everyone will support us. Start by coming out next Saturday for our 73rd birthday celebration," said Sue.

In the meantime, regulars like Stewart Russell will continue to come not just for the good food but also for the community and friendship offered by the little restaurant.

As the enticing odor of blackberry, sugar cream and coconut cream pie wafted out of the kitchen, Stewart said his goodbyes for the morning.

"I'll be back in a little while for lunch," he said.

"We'll have a birthday pie waiting for you," Sue smiled back.