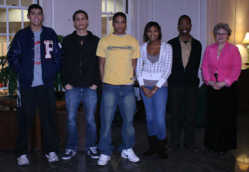 The Putnam County chapter of the NAACP has sent a group of four local students and a pair of chaperones to Washington, D.C. this week to be a part of the inauguration festivities for Barack Obama. Making the 10-hour trip were (from left) Derek Dean, Robert Watson, Ashton Marshall, Allison Cobb and chaperones Rajai Bimbo and Beth Newton Watson.

As unprecedented crowds gather in Washington, D.C. today to celebrate the inauguration of Barack Obama as the 44th president of the United States, at least six residents of Putnam County are among the hundreds of thousands seeing the event in person.

The Putnam County NAACP chapter sent four local high school students and a pair of chaperones to Washington to be a part of the inauguration. Making the trip were Robert Watson and Ashton Marshall of Greencastle High School and Allison Cobb and Derek Dean of South Putnam. Trip chaperones are NAACP Chapter 3051 President Rajai Bimbo and Beth Newton Watson.

The six travelers will not only be witnessing history, but they will be encouraged to document what they see, whether with cameras, journals or video recordings. In this way, they will also be able to bring their experiences in Washington back to Putnam County to share with others.

"This is a very historic moment. This is a pivotal time and we want to record it," Bimbo said.

"I think we're bearing witness," she said. "We'll be able to tell people about what we saw and why it was important."

The group departed Greencastle on Sunday morning and is staying with a D.C. resident with Greencastle ties for three nights. They will begin the trek back on Wednesday morning.

With Sunday night and both Monday and Tuesday in the capital, they will also have the opportunity to experience more of the city than simply today's inauguration.

The four teenagers find themselves at a unique age to be witnessing the country's first African-American president. On one side, they are old enough to see and understand what is going on politically. On the other, the are still at a point in their lives in which they can go and witness the event without leaving behind many responsibilities.

"It's the first time we're going to have been old enough to understand what's going on," said Robert Watson.

Between the students and the chaperones, all seem to share an appreciation for the history they will witness.

"So much of the world will be watching," said Beth Watson. "People feel like the United States, in this election, once again became a leader and took a risk. Things are not perfect here, but this election makes people around the world who have been marginalized more hopeful."

Bimbo also sees the trip as an opportunity for future leaders to learn from the current leaders of the nation.

"I think some of the people we're taking are finding their own leadership qualities," he said.

As of Thursday evening, the group had been unable to secure tickets to the inauguration, but were still hopeful. If they don't get tickets to the actual event, they plan to try and watch from the Lincoln Memorial.

Wherever they are for the event, all six know it will be more exciting than watching from Indiana.

"They get to watch it on TV at our school. To actually watch it in person will be 10 times better," said Marshall.