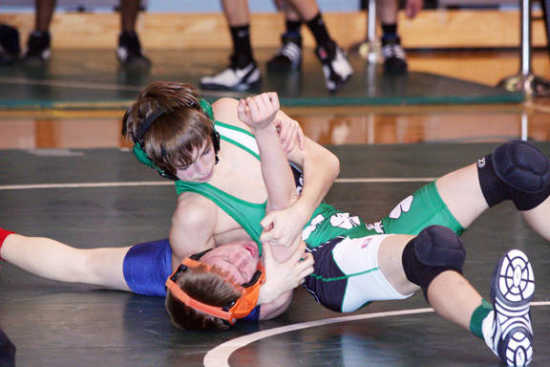 CLOVERDALE -- Cloverdale ended its day at the West Central Conference tournament with six individual champions, but had to settle for a second place finish. Cascade was once again crowned champ with a total of 179.5, while Cloverdale amassed 165.5 and Greencastle was third with 157. North Putnam placed fifth with 112.5 and South Putnam was seventh with 79 points.

"Five champions, the most of any team," CHS head coach Steve Livingston reflected. "When you walk out of here with seven guys in the finals, half the weight classes, five of those seven get first, you have to celebrate that, but what hurt us is after you go from those seven guys, we had two guys get fourth. When you have 14 weight classes and you get nine guys that score, it's hard to compete."

Hesselgrave bounced back from a loss to North Putnam's Tyler Ruble, so it was only fitting that the two battled it out for conference champion. Hesslegrave outlasted Ruble to receive a 9-6 decision.

At 189, Mayhew battled Cyle Hill of Cascade for the title. Early in the match, Hill hoisted Mayhew and rode him to the mat hard, earning some reaction from the crowd. After a few moments, Hill once again elevated Mayhew and jammed him to the mat on the wrestler's upper back and neck, which garnered an even louder reaction than the first. Mayhew earned the win after Hill was disqualified for violations.

Livingston acknowledged that he knew something was off from the beginning. He told the team before the meet that they weren't the team everyone had been seeing for the past couple of weeks and in the early going that was evident. 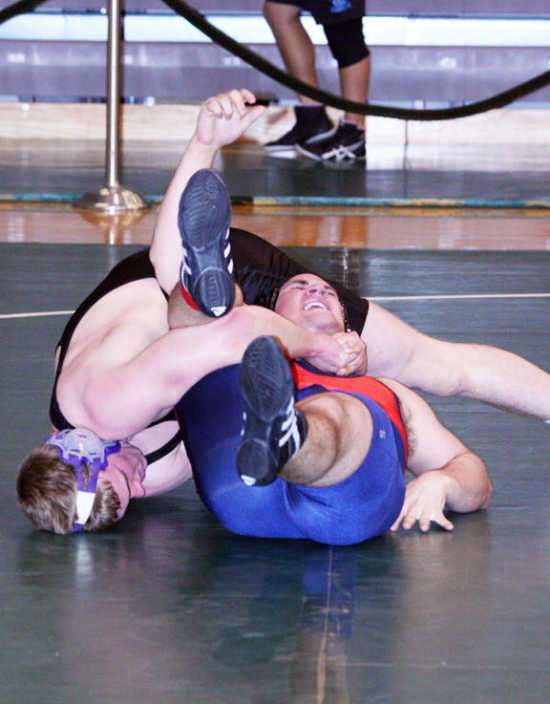 "We had a kid miss weight, uncharacteristic out of our kids," Livingston said. "When you have kids missing weight, you know it's not a good start to the day. Then we came out flat. Really, we wrestled flat up until the finals."

Asked if the time off due to the weather in the days leading up to the event played a part, he noted it might have, but he felt it was more of a psychological issue.

"It does and it doesn't. I take full responsibility for it and I told the guys that we wrestled well at Ben Davis, at county and at South Vermillion and I told them from the beginning of the year that good is the enemy of great. We started getting good and we held ourselves back from getting great," Livingston commented.

Greencastle built from their impressive outing at county and ended with a third place finish.

Trevor Teal (125), Jesse Ford (171) and Jacob Wright (215) were individual champions for the Tiger Cubs. There were five all Putnam County finals, with Ford and Wright being part of two of those.

Ford took on Cloverdale's Matt Hall, winning by fall, while Wright battled North Putnam's Dustin Vires for the 215 title. Wright and Vires fought with each giving little, but once on the mat, Wright was able to maneuver Vires into position to get the win by fall.

North Putnam entered the tournament with a youthful team and was able to fight to a fifth place finish on the day. The Cougars fielded no champions but had solid finishes across the board. When asked about his team's placing, North Putnam head coach Kenny Kerns was more than pleased with their performance.

"Well considering that we haven't had practice since Wednesday, we did all right. We were just out of shape; you can't take two days off. We had three seconds and four thirds, we finished last last year and we're fifth this year. A young team with no practice -- I'm real proud," Kerns said.

On a day where matches lasted two and three periods, with some even seeing overtime, Kerns was excited and enthusiastic after the tournament.

"I like this; Cloverdale's tough, Cascade's tough -- this is just good wrestling," he commented. "We had some really good wrestling, hard-nosed, the fans got into it -- it almost looked like Hoosier Hysteria for a minute there. It was wonderful," he laughed.

Always looking forward, Kerns believes that the quality of wrestling in Putnam County is going to open some eyes when it comes sectional time.

"I'm looking forward to our sectional -- I think we're (Putnam County) going to make some noise," he said.

Speaking of youth, South Putnam fielded a team comprised mostly of underclassmen, but it was a senior that came away standing atop of the podium at the end of the day.

Eagle wrestler Antonio Hernandez was crowed champion at 145, beating out North Putnam's Madison McClellan for the honor. Hernandez left little doubt, with all three of his wins on the day coming by fall.

"I was real proud of Antonio. A senior coming in and that was great -- he did a fantastic job; I was thrilled for him. He came in wanting this and pinned everybody," SPHS head coach Todd Crosby said.

Where some coaches would look at youth and inexperience as a bad thing, Crosby knows what he has and what potential the team has.

"We've got some promising freshman. T.J. Franklin and Matt Ballew showed up and wrestled really hard for us today; Jesse Gardner's another freshman," Crosby said. "Having 10 freshmen, I'm pretty proud. I know, (we were) last place, but you look at what you have coming in the future, I'm excited."

Livingston felt the team's lack of aggression was due to the fact they began to just think they could show up and the results would come. After the match, the person he was hardest on was himself.

"You have to stick with what brought you,' he said. "Not that we were getting fancy in what we were doing, but we did start to, I think, get relaxed as a team. I think we let some of that go to our head and started to take things for granted and that bites you every time. I've told the kids that all year and maybe I should have listened to some of my own words.

"They (Cascade) came in with six No. 1 seeds and one No. 2 seed. We can in with one No.1 seed and six No. 2 seeds and we walk out with five champions and they have three. I can't be upset with our guys that made it to the final, but coming in we knew those wrestle backs were going to make or break us," he concluded.