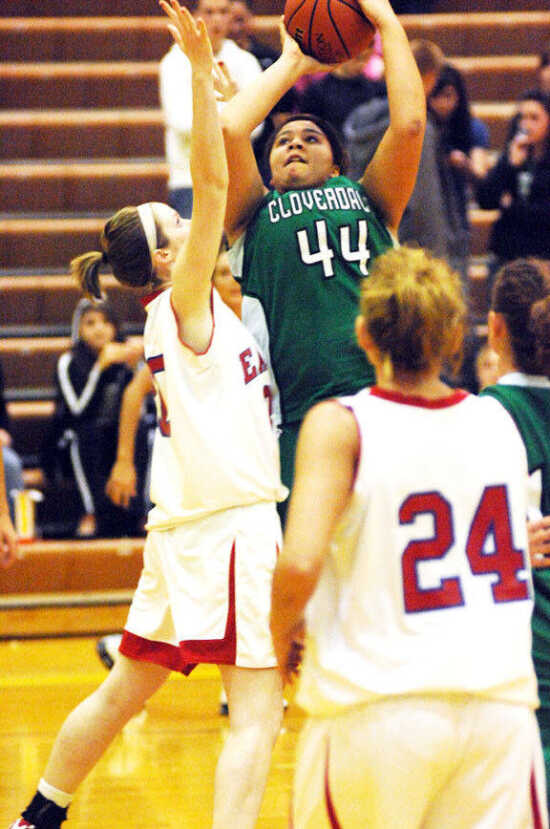 Cloverdale senior Elizabeth Cheatham poured in 28 for the Clovers in their sectional contest against South Putnam.

SPEEDWAY -- The Lady Clovers made a statement Wednesday night.

They're not going to roll over for anyone in the Speedway Sectional.

Cloverdale stunned the crowd at Speedway Wednesday night when it upset South Putnam 54-46 for its first sectional win in nearly ten years.

"We've done a lot of talking lately and our four seniors have been good to us these last four weeks, we played hard against Speedway, got a good win at home against North Putnam and played good against South and we've been telling them we're going to turn the corner," CHS Coach James Wade said. "We had a rough season but they have always worked hard and kept working and never gave up and I've been telling them all season that we are working for the sectional and come sectional time we will be ok and it showed tonight."

Cloverdale took nothing for granted in its opening round game, Wednesday as it shut out South Putnam 16-0 in the first quarter and then in the second quarter held them to nine points with their first field goal coming with just over four minutes left in the half.

The Clovers at one time held a 20-point lead over the Lady Eagles in the second quarter, but South Putnam didn't just give up and hand the Lady Clovers their first win in nearly a decade. They made them work for it.

South Putnam battled back and outscored the Lady Clovers 21-9 in the third quarter and got within four of the lead.

In the fourth they got within two with just under four minutes left, but couldn't pull it off.

Cloverdale kept dumping it into the post to Elizabeth Cheatham for the score. Cheatham finished the game with 28 points, over half of her team's total.

"Cheatham worked hard in there and she's a good player," Steffy said. "We had a hard time matching up with her and we tried several things, so credit to them, they played well."

Cheatham, who only played eight regular season games, was a force to be reckoned with in the paint,f going 13-for-17 inside the lane and 4-for-five from the free throw line.

"The girls are so unselfish, and Elizabeth works so hard down there and I'm so happy for her," Wade said. "She has only been able to play eight regular season games and she really isn't in game shape yet because of the lack of practices we have had since she came back.

"We haven't been able to run as much as we want, but she plays so hard and she does the little things for us and the girls keep giving her the ball," Wade added.

As a team, the Clovers went 14-for-22 from the charity stripe, something that won the game for them.

When South Putnam was close to overtaking the Lady Clovers, Cloverdale would hit its free-throws and extended its lead just a little more. Towards the end when the lady Eagles started to foul even more, Cloverdale hit their freebies to ensure the win.

"Free throws saved us tonight," Wade said "We have struggled with them this season but lately we have been getting better and we hit them when we needed them tonight."

Cloverdale advances to the semifinals on Friday where they face Tri-West at 7:30 p.m. while South Putnam finishes the season 9-11.