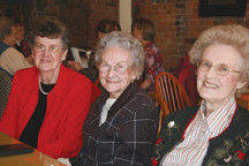 The movie "The Divine Secrets of the Ya-Ya Sisterhood" is the fictional story of several women who form a warm bond of friendship. In Roachdale there is a group of women who have developed that bond in real life. They call themselves the Town and Country Home Economics Club.

Despite becoming increasingly busy with organizing kids, careers, husbands, farms and households -- or maybe because of it -- these women came together 60 years ago and formed a club and friendships that have lasted decades.

These ladies are, to quote their Club President, "right up to snuff."

"Many of us were farm wives. That makes a very stable neighborhood. Farmers don't move much, so most of us stayed together," smiled Club President Barbara Brookshire.

The Home Economics Club began in 1949 when one of the members of the Roachdale Home Ec Club, in fact it was Ruby Crosby's mother-in-law, suggested the younger women start a club with ladies their own age.

"We started out with all our little kids and tried to keep patient. Then we tried to hire babysitters. Our husbands never did get asked to baby-sit," recalled Brookshire.

They called it Town and Country Home Economics Club and there were 21 members at that first meeting, held in Crosby's home. The agenda for the first monthly meeting continues today. First are pledges to the American and Christian flags, the club creed, a song of the month, roll call, devotional thoughts, committee reports, lessons, refreshments and social time. Dues were 50 cents a year and membership was set at 24. They met that number in the first year.

Educational lessons were and still are presented by different members who, each month, learn them from the Purdue Extension office.

The first one was given by Marjorie Harney and Lethis Myers. It was about the care and selection of Rayon and Nylon fabrics. According to the women, there has been a wide range of subjects covered. Edith Fry recalled a lesson about engine repairs.

"We learned if your fan belt breaks you use your panty hose as a temporary belt," she commented with a laugh.

The Club has held 720 meetings over 60 years. These gatherings were something they all looked forward to. Crosby and Fry shared a story about having to take a special ride to get to the meetings a few times.

At the time, most of the women lived in or near town. Crosby and Fry didn't and they couldn't get their cars out because of the weather. Crosby's son, John, got the tractor out and the two hitched a ride into town on the fenders of it.

"We didn't care what it was, we wouldn't miss a meeting for anything," said Fry.

"In recent years it became a more popular idea to eat out. The Putnam Inn was the club's choice for many a Christmas event," she said.

The oldest member of the group is 97 years young. Her name is Ellen Purcell and she just learned to use a cane last summer. She still makes quilt tops and gets to every meeting.

Crosby knits baby Afghans; Fry works on her computer and paints. Winings still sews her prize-winning clothes and they all take part in the Annual Garage Sale and their "Bag It" booth.

In fact, these women are all highly talented. From painting, cooking, gardening and knitting to sewing and graphic design, they are a gifted bunch.

One of the most important parts of their organization is contributing to the local 4-H program. Several members and their husbands have served as adult leaders; some have been on the fair board and county extension office. They have been judges and teachers.

For years, educational tours were an important piece of the club's history.

"In 2003 it became necessary to find 'handicapped accessible' places. Since then the club has held its meetings in the classroom at the Roachdale Christian Church," said Fry in her history. 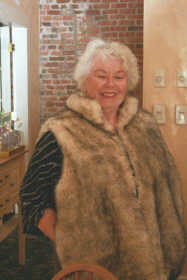 Claire Winings competed at the Indiana State Fair with her fur vest. She is a star seamstress and member of the Town and Country Homemakers Club.
Order this photo

In recent years, Marjorie Hopkins and Brookshire have been busy as area 4-H Club judges for the county and state fair.

Brookshire and Delores Risk were also part of the Homemaker Exchange Program. Both women traveled to foreign countries as exchange homemakers. Risk went to Colombia and Brookshire to Scotland. In return, four women visited Putnam County. They were from Kenya, Ireland, Poland and New Zealand.

In fact, last year exchange homemaker Yvonne Moore came back from New Zealand for a second visit with Risk and her family. It was exactly 20 years from her first visit.

"We stay in touch, like family," Moore told the Banner Graphic last summer during her visit.

Risk and her husband James spent their 50th wedding anniversary in New Zealand in 1992 visiting Moore.

The Town and Country Homemakers were recognized at their 50th anniversary by the Past President's Club. Fifty-year members Risk, Crosby, Brookshire, Betty Burdett, Dorothy Lawler Ford, Ellen Purcell, Pauline Baird and Florence Skelton were given pens recognizing their milestone in the club.

The women took part in the first Ladies Day at the Putnam County Fair. It began in 1971 and club member Clema Perkins won the Husband Calling Contest. Fashion Shows were an important event and Brookshire, Perkins and Claire Winings were winning participants advancing to the State Fair level.

In the Schwabs Bake Off, five club members entered with Helen Creviston winning first place with her muffins.

Talking about baking brought up the subject of the group's Cob House, built on the square during the farmers market so the ladies could sell their "corn doodles."

"They were snicker doodles made with cornmeal," they recalled. "And the Cob House was built out of corn cobs, that's how it got its name," they laughed.

"We are not only homemakers, but our talents which are many and varied, such as being a nurse, artist, teacher, 4-H exhibit judge, school bus driver, farm wives, telephone operators, bookkeepers, cooks, decorators, gardeners, crafters, quilters, clowns, fashion models, hospital techs, good neighbors and support club sisters," writes Fry at the end of the history.

In their creed they profess "to believe in the present and its opportunities in the future and its promises, in everything that makes life large and lovely." They have lived by their creed and continue to do so today.

"We've had a lot of good times," smiled Crosby.

These are women who have gone from their 20s and 30s to their 60s, 70s, 80s and even 90s. They know each other's children and grandchildren. They have lived through births and deaths, marriages and loss of husbands.

Many of them still drive themselves; some do not. They talk of retirement homes, living alone, growing older and all the things that make life worthwhile. And, through it all, for six decades on the second Thursday of every month they come together to celebrate each other and life.

These lovely, talented ladies are truly, "right up to snuff."