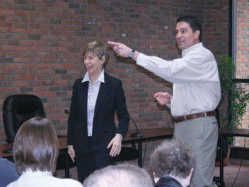 Congressman Brad Ellsworth (right) motions to the back of the room as he and Mayor Sue Murray bring Wednesday's meeting to a conclusion.
Order this photo

He may be out of Washington this week, but 8th District Representative Brad Ellsworth is still thinking and talking about Congress's recently passed economic stimulus plan.

Only now it's with his constituents, not his colleagues.

Ellsworth made a stop at Greencastle City Hall as part of his third-annual Open Door Listening Tour Wednesday. As he took questions from local residents, the topic rarely strayed far from the failing economy and what elected officials are doing about it.

The congressman was quick to point out that he doesn't have all the answers and that nobody does. Exactly what course to take remains unclear.

"I think we're all scared right now. I don't think anyone has a clear-cut formula that says one plus one is going to equal two," Ellsworth said.

Lawmakers had to choose a path and follow it, though. With the economy in its worst shape since the 1930s, Ellsworth said he had to vote for the final draft of the stimulus bill.

"When the second version came around, we wanted to do something. No one wants to spend $780 billion of your money," he said.

In the end, he chose not to "sit around and do nothing."

It wasn't always that way, though, as Ellsworth voted against the bill when it was in the House of Representatives the first time.

"I saw things in that bill that weren't stimulative," he said. "There were a lot of things that I saw and wondered, 'How am I going to come back to Indiana and explain that to you?'"

But the bill still had to pass the Senate, where many of the questionable points were trimmed away. While House members were not given the 48 hours they were supposed to have to review the final version of the bill, in the end, he felt it had to be passed.

Having spent some time with the President Barack Obama on his recent trip to Elkhart, Ellsworth shared that Obama expressed his own regret that the bill had not been approached in a more bipartisan manner.

"Maybe the better version would have been to go before the Republican Caucus before it was written and say, 'What do you want in it?'" Ellsworth said.

He added that in that case it would likely have included more tax cuts along with the spending. He added, though, it is the majority party that writes bills, and the Democrats had the votes to pass it.

The congressman also touched on several times on his efforts not to engage in the partisan fighting that many associate with Washington politics. When asked about the congressional leadership losing touch, Ellsworth let the crowd know that was why he was in Greencastle right then.

"Whether you voted for me or not, I am your closest link to the federal government," he said.

He also spoke of being one of the 49 "Blue Dog Democrats" in the House, who tend not to be as liberal as the party at large. With many of the Blue Dogs coming from conservative leaning districts, Ellsworth said they have to stay more in tune with what is going on in their districts than house members in so-called "safe" seats.

This group is also willing to voice its dissent with the party as a whole, and hopes to keep the party accountable to the people in its promise to change the way business is conducted at the Capitol.

"There's a group of us on the Democrat side who wrote letters to our leadership saying, 'Let's do it the way we said we were going to do it,'" Ellsworth said.

The overriding theme of Ellsworth's visit was of trying to be honest with his constituents. If he didn't know the answer, he'd say so. If the answer wasn't positive, he would still give it.

Asked about the state of Social Security, Ellsworth didn't hesitate.

He added that fixing Social Security would involve tough choices. The government will either have to cut benefits to retirees or increase the Social Security tax on workers.

Neither choice is popular.

"We in Congress have been afraid to make that call," he said.

With a number of his staff members in tow, Ellsworth hoped to return to Washington next week with the questions and answers he's gotten from Indiana citizens during his week of traveling around the district.

He said what they have to say rates above what he has to say.

"When we ask for this job, along with it is the obligation to come back and tell you what's going on," he said. "I think it's important to get back here and listen to you all."