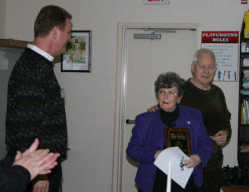 Marj Weaver was named Volunteer of the Year by Putnam County Habitat for Humanity Saturday morning. She and her husband George were at the Annual meeting and brunch to accept the award from Habitat Board President Darrell Brouhard.
Order this photo

Marj Weaver was named Volunteer of the Year by Putnam County Habitat for Humanity Saturday morning at the organizations annual meeting and recognition brunch.

Weaver and her husband George are just two of the many people who work with Habitat for Humanity in Putnam County.

Habitat Board President Darrel Brouhard told the group being honored that several studies show some of the potential benefits of homeownership to be:

"It takes a lot to build a home," said Brouhard as he began passing out certificates and awards to volunteers.

Since its founding in 1976 by Millard and Linda Fuller, Habitat for Humanity International has built and rehabilitated more than 300,000 houses with partner families, helping house more than 1.5 million people and becoming a true world leader in addressing the issues of poverty housing.

Their personal involvement in Habitat's ministry brought the organization national visibility and sparked interest in Habitat's work across the nation. HFHI experienced a dramatic increase in the number of new affiliates around the country.

Through the work of Habitat, thousands of low-income families have found new hope in the form of affordable housing. Churches, community groups and others have joined together to successfully tackle a significant social problem -- decent housing for all.

Today, Habitat for Humanity has built more than 300,000 houses, sheltering more than 1.5 million people in more than 3,000 communities worldwide.

People like Marj Weaver are behind the success of the organization. Weaver has been involved with Habitat for nearly ten years.

"Habitat for Humanity has shown that building homes does more than put a roof over someone's head. In clean, decent, stable housing families can provide stability for their children. Their family's sense of dignity and pride grow," Weaver, told the group gathered at the brunch.

Habitat -- through volunteer labor and donations of money and materials -- builds and rehabilitates simple, decent houses with the help of the homeowners. The houses are sold at no profit and financed with affordable loans.

The organization's Web site said mortgage lengths could vary from seven to 30 years. It also said the monthly payments are then used to build more Habitat homes.