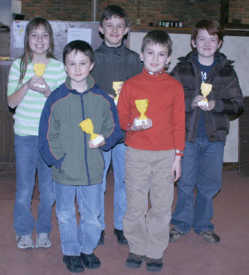 Winners of Greencastle Parks and Recreation's 2009 Brick Mania contest were chosen and honored at Wednesday's monthly park board meeting. Winners received trophies made of actual Legos. Parks and Recreation Director Rod Weinschenk reminded the winners they could keep the trophies or take them apart and add the bricks to their collections. Winners in attendance Wednesday were (front, from left) Ben Wilkerson, Evan Davies, (back) Whitney Weinschenk, Zach Wilkerson and Parker Black.
Order this photo

The Greencastle Park Board meeting had a larger than normal crowd Wednesday evening as it hosted the judging and awards for the 2009 Brickmania contest.

Board members had a half hour before the regular meeting to judge the wide array of entries and pick their favorites. First and second place winners in each category were rewarded with trophies built from Legos.

Divisions were made between kit entries and original creations, as well as between different age groups.

Kit entries included castles, space creations and a number of vehicles. Winners in the children's kit were Zach and Ben Wilkerson, with Evan Davis placing second. The family kit first place was exhibited by March and Ross Greenberg.

Most of the entries came in the original creations category. Original creations included everything from robots and vehicles to the Notre Dame cathedral. In the under 7 division, Marcus Greenberg was the winner, with Michael White placing second. Whitney Weinschenk won the 8-12 division, followed by Parker Black.

In the regular portion of the meeting, Parks and Recreation Director Rod Weinschenk reported on a mostly slow month with one exciting announcement.

Weinschenk recently received a letter from State Forester John Seifert with the Department of Natural Resources saying that Greencastle has been approved to receive a $4,380 matching grant from ALCOA and IDNR, Division of Forestry.

The grant, which is part of the Community and Urban Forest ALCOA Tree Planting Partnership, will partially fund the removal of a number of ash trees from Robe-Ann Park and the planting of new trees of other breeds in the park. 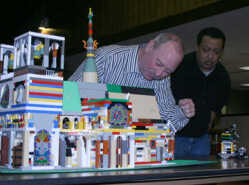 Park board members Russ Evans (left) and Tim Trigg lean in for a closer look at the reproduction of Notre Dame built by Sarah Dory.
Order this photo

Although the later part of winter is slow for the department, Weinschenk reminded the board things will soon be picking up.

"Once Easter hits, we know that we won't be sitting down until October," he said.

Assistant Director Cathy Stiles informed the board about this year's spring break program. This year's program will from 9:30 a.m. to 2:30 p.m. on Monday through Thursday of spring break.

DePauw has offered the use of its Memorial Union Ballroom free of charge. A definite plan for the week is a visit to the university's physics department, with visits to the library and chemistry department also possible.

Stiles said she is still looking for volunteers to help with the program, as there will be between 30 and 50 kids involved.

Weinschenk also reminded the board that the gates to Robe-Ann Park open April 1.

The Greencastle Park Board meets regularly at 7:30 p.m. the first Monday of each month at Greencastle City Hall.