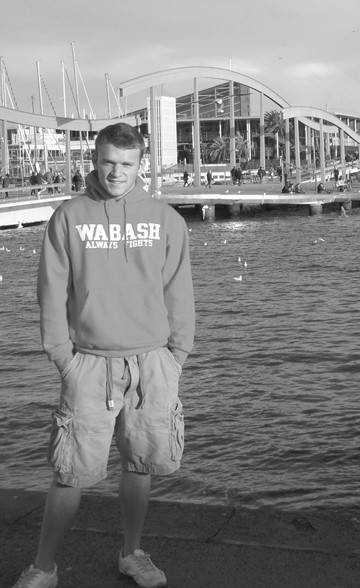 T. Michael Fitzpatrick of Crawfordsville is pictured at Port Vell in Barcelona, Spain. Before the Barcelona Olympics in 1992, the Port Vell, the city's old obsolete harbor was only a run down area with empty warehouses, industrial buildings, refuse dumps and railroad yards. In one of the most drastic urban renewal projects, the area was transformed into a yacht basin and entertainment center, opening the city up to the sea.

CRAWFORDSVILLE -- T. Michael Fitzpatrick, a junior at Wabash College, was selected to participate in the Wabash College International Studies Program and is currently studying in Barcelona, Spain for his second semester junior year.

Fitzpatrick just finished up his fall semester at Wabash College where he served as vice president for his fraternity, Sigma Chi, was a member of the Little Giant NCAC championship football team, and was named to the Dean's List after earning a 3.5 grade point average.

Fitzpatrick spent last summer interning at the Indianapolis Motor Speedway where he was responsible for managing the daily operations of concession stands in turn one of the motor speedway.

Fitzpatrick, a junior, is the son of Tom and Mary Fitzpatrick, Weyauwega, Wis. He is a 2006 graduate of Weyauwega-Fremont High School.