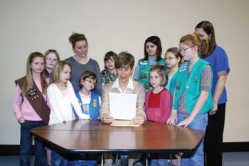 Mayor Sue Murray has designated March 8-14 as Girl Scout Week. She signed the proclamation during a leader's meeting Thursday at Tzouanakis Intermediate School.

In addition to displays at the elementary schools, the Putnam County Museum and Putnam County Public Library will have Girl Scout exhibits during the week.

Troops will honor the first baby girl born on Girl Scout birthday celebrated March 12. A gift basket will be presented to the baby girl and her parents at Putnam County Hospital.

Troop leaders also have special things planned for their girls during Girl Scout Week. Leaders may have lunch with their troop or possibly decorate their lockers.

America's best-known cookies are also still available to the public.

To help support Girl Scouts of Putnam County, visit Kroger or Wal-Mart, where cookies will be sold. They are only available for the next three weekends.