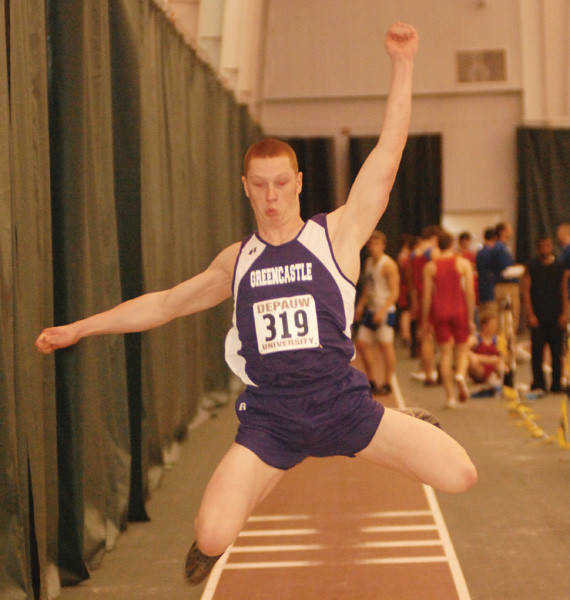 Ryan Payne leaps into the air during the long jump competition at the Hoosier Relays Saturday.
Order this photo

With the spring track season just around the corner, two of the Putnam County teams are fine-tuning their squads with some indoor meet running.

Greencastle and Cloverdale took part in the Hoosier Relays Saturday at DePauw University. This was one of the many qualifying rounds for the state indoor meet that will be hosted at Purdue University on March 21.

The good thing about this meet is that competitors don't have to win to advance.They just have to beat the cut time; and several county athletes did.

"We did all right," GHS Girls' Coach Garry Anderson said. "We weren't out on the track until last week. We have 15 freshmen and 10 sophomores on the team this year so a lot of stuff is new for us this year.

"With each meet now we're trying to get better and better till we get outside," Anderson said.

There was one upset of the day in the shot put event. Gannaway's throw wasn't a first place throw; it was second to a county rival. Elizabeth Cheatham of Cloverdale threw 38-feet-5-inches, taking first place.

"This is an improvement for her," CHS Coach Kristen Crabtree said. "She has done a good job with her weight training and the ankle injury she suffered in basketball worried us, but it doesn't seem to be affecting her throwing yet.

"This was a record for her and even though indoor meets don't count for the school record, it gives us hope for what she can do this season," Crabtree said.

Even though he is accustomed to seeing Gannaway winning the shot put event, Anderson wasn't disappointed with the results.

"She's only been out of swimming for three weeks so she really hasn't had that much time to throw and practice," Anderson said. "Cheatham will be a challenge for Caitlin this year and that's good for both of them."

There was one other girl from Cloverdale to qualify for the state finals in freshman hurdler Brooke Gray.

"Brooke run was very impressive with her being a freshman," Crabtree said.

In the boys' competition, Greencastle is sending three individuals to the state finals and three relay teams.

Jordan Lewis will be going to Purdue in the high jump competition after clearing a height of 6-feet while Ryan Payne will be going in the long jump event after leaping 19-feet-7.5-inches, while Greg Lilly will be representing the Tiger Cubs in the 55-meter hurdles after running a 8.48 time.

"Ryan nearly matched his best from last year," GHS Boys' Coach Mike Schimpf said. "He was only two inches away.

"It's the first meet of the year and we had 750 athletes in 55 teams signed up for today. It's just a good opportunity to run against some quality competition and it's just nice to finally get out and run a meet," Schimpf said. "Now we will see where we need to turn the screws at."

Cloverdale also advanced a boy out of the qualifying round Saturday in James Hinton.

Hinton qualified for the state finals in the long jump event in which we jumped 20-feet-1-inch, the fifth best of the day.

The funny thing is, Hinton wasn't even supposed to participate.

"James' jump was really great because I wasn't going to have him do anything because he just got out of basketball, but one of my athletes got sick with the stomach flu so he was my replacement and it turned out to be a good thing," Crabtree said. "He is definitely a jumper for us. In practice he was nearly clearing 6-foot-5 on the high jump and he has had only a week's worth of practice."

All those who qualfied will be back in action on March 21 at Purdue University for the state finals.