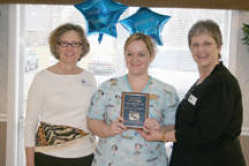 Tara Campbell, center, was named Employee of the Year during a brunch at Hickory Creek at Sunset Tuesday. Jan Richey, with the Hickory Creek Foundation and facility Administrator Gayle Camonte presented her with a plaque and jacket at a celebration brunch.

A roomful of people anxiously awaited the announcement of who was named the Employee of the Year at Hickory Creek at Sunset Nursing Home Tuesday morning.

Anticipation rose as facility Administrator Gayle Camonte introduced each of the twelve candidates named as shinning stars at the nursing facility. Finally, she called Tara Campbell to the front of the room where she and Jan Richey, with the Hickory Creek Foundation presented the Employee of the Year award.

"She truly is a shining star," said Camonte. "She goes the extra step and is always willing to listen to residents and a ray of sunshine."

Campbell, a Qualified Medication Aide (QMA) has worked at Hickory Creek since June 2004. She was previously named May Employee of the Month.

Camonte referenced a quote from the late President John F. Kennedy as she described the staff of the nursing home, saying, "One person can make a difference and every person must try.

"That's what these people do," said Camonte.