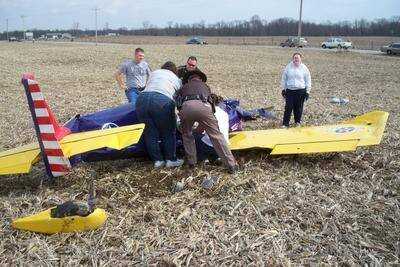 An Indianapolis man who crashed the plane he was piloting into a Putnam County cornfield on March 7 has died.

Greencastle resident Beth Ann Newton, who was first on the accident scene the day of the crash and has become friends with Walter E. Fritz's family, confirmed that Fritz died Thursday at Methodist Hospital in Indianapolis.

Fritz, 79, was originally taken to Wishard Hospital, but was transferred to Methodist per his family's request several days later.

A report from the Putnamville Post of the Indiana State Police said Fritz took off on a solo flight from the Putnam County Airport around 10:25 a.m. on March 7, and shortly after that the plane went down in a farm field just west of C.R. 275E and C.R. 325S.

Newton said Fritz's death came as quite a shock, as he had been making remarkable progress.

"He was off the IV's, off the breathing tube and off the feeding tube," Newton said. "He was eating."

Then on Thurday, Fritz's heart stopped. Newton said it is unknown whether or not the heart attack was connected to the injuries Fritz sustained in the plane crash.

On the day of the accident, Fritz was heading home after having breakfast with a friend in Putnam County. Although no official reports on the mishap have been released, Newton said Fritz's family believes he encountered engine trouble and tried to put the plane down in the field.

Newton said she was just driving by when she saw the plane go down.

"I kept him talking until the ambulance came," she said. "He was conscious, but he was very badly injured."

Ruby Craig, a nurse from Methodist who lives in Reelsville, also happened by the scene and stopped, Watson said.

"(Craig) would go in and check on (Fritz)," Newton said. "I've become good friends with his daughter and one of his sons. He has five children."