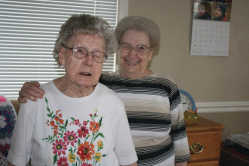 Doris Hicks is nearly a century old and the 98-year-old is still going strong. She and roommate Hameta "Brownie" Crooks keep things lively at Hickory Creek at Sunset.

Doris Hicks loves the American Beauty red rose. She is much like the lovely flower herself. At 98 years young, she is a delight to talk with.

The Hickory Creek at Sunset resident was born in Morrillton, Ark. on November 21, 1911 where she lived with her parents until going to college.

"We lived in town. My father was a carpenter and worked out of town a lot. There weren't any sidewalks and the streets weren't like they are today. We only had one car. It was a Model T," said Hicks.

"We didn't have rugs and mats like today. There was no air conditioning and we didn't have very many conveniences. My mother was a wonderful cook and seamstress," recalled Hicks.

After one year of college, Hicks was offered a teaching position by a friend of her father's. She accepted it and began teaching and later went back to school to finish her degree.

"That was really hard. My dad wanted me to go all four years at once, but I couldn't. It wasn't easy to go back, but I did and got my degree," she explained.

While teaching she was introduced to her husband Dale Hicks by a lady she recalls everyone calling "Ma." But she didn't meet him in person for quite a while.

"Ma was very patriotic and serious. She owned the house where I rented a room with three other girls. We all worked. She came home one day at lunch and asked us if we would be willing to write to some men she knew who were in the military. She told us to think it over and we'd talk about it that night," said Hicks.

Later that night Hicks recalled Ma being very serious as she talked about what these men were doing for the country,

"She told us we didn't have to write to them but we should respect what they were giving up for the country. And, if we didn't want to write to one of them we could go upstairs and pack our things and move out. Then she told us to think about it some more," said Hicks.

The next day Hicks told Ma she would write. The name she was given was Dale Hicks. She continued to write for three years while he was in the service. When he came home they were married.

She considered herself lucky in her selection. Not only did she fall deeply in love with Dale, but she was more fortunate than her fellow boarders.

"One of them was engaged to a local boy and probably married him. The other one dated the man she wrote to. After a while she found out he was married," she said.

She continued to teach after marrying. In fact, she taught elementary students for 32 years before retiring.

"I didn't like high school kids as much. Things are a lot different now. Students were quieter back them, they didn't come up and talk to you like they do now or say the things they do now. I always wanted to be a teacher," she said.

Both of her children, daughter Martha and son Hugh, were graduates of Greencastle High School. Martha went on to graduate from Indiana University. Doris is proud that three of her four grandchildren also are IU graduates.

Later in life, Doris became a farm wife when Dale decided he wanted to buy a farm outside Greencastle.

"I threw one of my fits because I'm not a farm girl. I was raised in town and never spent any time on a farm. I didn't want to do it," smiled Hicks.

Her husband reassured her that he would make a success of it and he did.

"If I had to do it all over again. I think I would be a farm wife," she laughed. "I really loved it."

She and Dale were married over 61 years.

Hicks loves to read, although she has trouble now with her eyesight. She walks every day and loves being outside. She'll help with the facility's garden when they are ready to plant.

Her favorite flower is the aforementioned American Beauty.

"My mother grew roses. Every year we would drive to Little Rock and get the latest roses. They grew all up and down around our house. The last one we got was the American Beauty. I love it because it reminds me of my own mother," she reflected.

She and her roommate Hameta "Brownie" Crooks spend a lot of time together. They go on group expeditions with other residents and enjoy activities at Hickory Creek at Sunset. But mostly they enjoy each other.

"We like to giggle," said Crooks, who will turn 86 this May.

Neither woman worries much about her age.

"People always ask me how it feels to be this age," said Hicks.

"It feels like any other birthday. They come just like they always have. Besides," she adds with a laugh, "You're only as young as you feel."