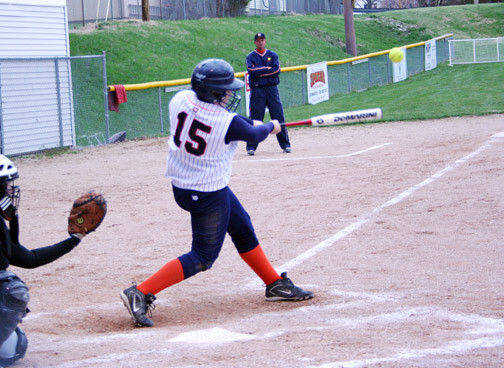 North Putnam's Dakota Malayer smacks a double in the second inning of the first game of a double header against Greencastle Wednesday.

With the 2009 softball season still in its infancy, the Tiger Cubs and Cougars clashed Wednesday in a double header. North Putnam came out on top in game one 20-0 and in the second 5-2.

North Putnam (2-0, 2-0 WCC) came out wielding a hot bat, while starting pitcher Taylor Judy recorded a no-hitter in game one.

North Putnam added two more runs to close out their scoring to bring the score to its final tally of 20-0.

The Cougars were able to mix sharp hitting with blazing speed on the bases to get the win. Head coach Jim Brothers was pleased following the game with the way his team attacked the base paths.

"We were aggressive," Brother said. "We made some unsure decisions, whether we should go or not, but for the first night out I was pretty pleased with everything that happened tonight."

The first game was a struggle for the Tiger Cubs. GHS was only able to send 17 batters step to the plate, seven of which went down swinging.

In the second game, it was a different story for the Tiger Cubs. Coming off a double-digit loss, GHS took stock, made necessary adjustments and showed that they will be a force to be dealt with.

"I think to be beat like that the first game, it allows us to learn some different aspects of our game that we have to figure out," GHS head coach Robin Knapp said. "I think to come out and play the second game the way they did shows a lot of character and shows they did make those improvements. We didn't come out on top, but we are pleased with the improvements they made defensively and offensively." 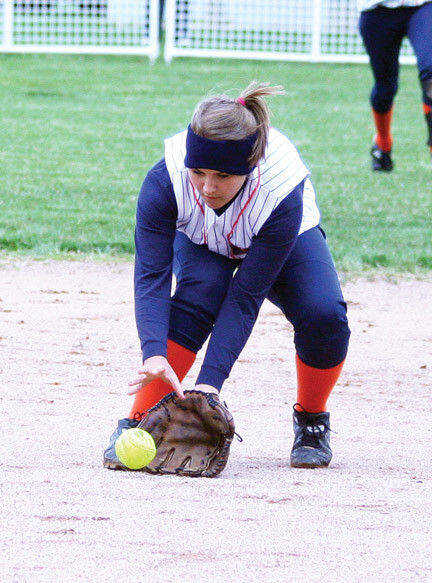 Lauren Green fields a grounder in the first game of Wednesday's double header with Greencastle.

The Tiger Cubs scored two runs in the top of the sixth inning when Miller and Taylor Pruitt crossed the plate. The Cougars tacked on three additional runs in the final two innings to close out the game.

Greencastle had its share of struggles on Wednesday, but the bright spots were evident as well. Knapp knows her team has what it takes to get the job done; now it's just a matter of making it happen. She was unable to pinpoint exactly what caused the Tiger Cubs the most problems in the first game, but she thought it came down to the team believing in itself.

"It's hard to say. I think it might have just been confidence," Knapp commented. "We saw some plays that we didn't see in practice or hadn't done in practice, so it was just trying to get them to be confident in what they've learned and what they know how to do. I think that's what came out in the second game more so."

For Brothers and his Cougars, there couldn't have written a better way to start the season. Each starter got a hit, they scored a total of 25 runs, but most importantly -- they recorded two conference wins.