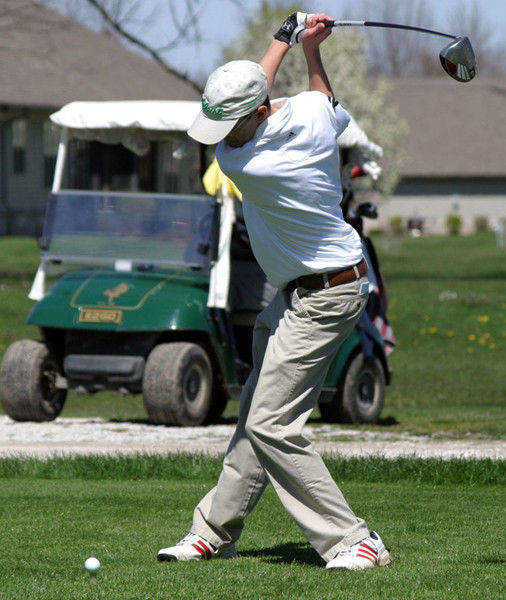 BRAZIL -- The steady rains that fell on the area over Thursday and Friday weren't enough to dampen the scores at the Riddell National Bank Northview Invitional on Saturday at Forest Park Golf Course in Brazil. 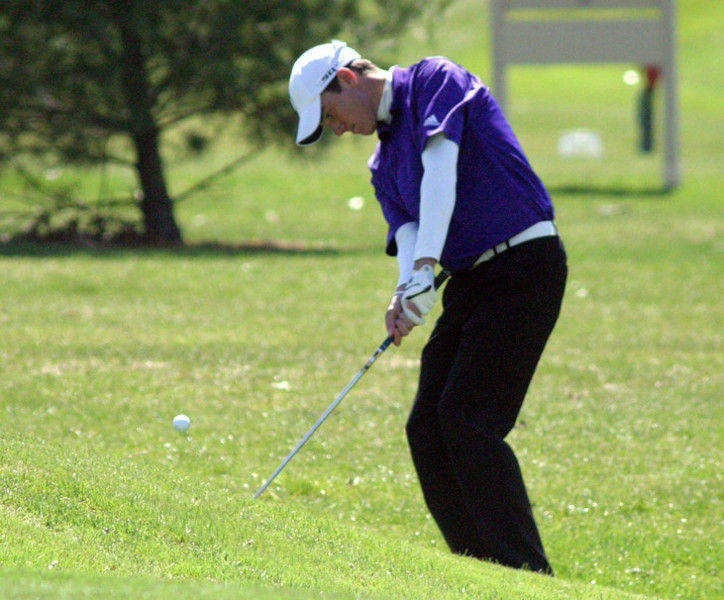 Greencastle's Brad Haussin (bottom) chips onto the green on the way to a 75 for the Tiger Cubs. Haussin's score placed the golfer in the top ten for the day.

Edgewood's Harrison Carmichael didn't let a soggy course dampen his assault on a possible invitational record, posting a 33 on the front nine and following that with a 34 to finish just two strokes off the invite record.

His Mustang teammates were apparently spurred on by his play, with Josiah Ashba shooting a 71 and Mitch Oard carding a 72 to push the team to the verge of a team invite record.

While Edgewood took home the team championship with its round of 289, the Mustangs narrowly missed the record of 288 set several years ago by Terre Haute South.

The Greencastle Tiger Cubs placed fifth as a team, scoring a 322 to finish 14 strokes back of Turkey Run and 19 behind both Terre Haute South and Nothview's 303.

The Tiger Cubs were led by Brad Haussin's score of 75 after a 37 on the front nine and a consistent 38. His teammates also provided solid, balanced play as both Luke Crimmins and Jimmy Wheeler shot 82 with Wade Huber tallying an 83 and Tyler Hopkins carding an 85.

The Cloverdale Clovers, posted a team score of 350, led by a 75 from Chris Arnold.

Though his team stood in 10th place, coach Doug Wokoun felt his team would improve as the season wore on.

"Because it's early in the season, we're very inconsistent," the Cloverdale coach admitted. "I saw some positive things today and some things we'll work on."

As for Arnold's effort on the Forest Park Course, Wokoun credited him with battling for the round of 75.

"Chris shot about where we thought he would," Wokoun said. "The encouraging part was he had some things go wrong, but he still competed for his score. We'll eventually get the other guys doing the same thing. There were a lot of reasons to be encouraged today."

Wokoun's squad also got an 88 from Mike Wellington along with an 89 from Keith Hathorn, a 98 from Gary Williams and a 102 from Sam Jordan.

"We're not discouraged. There's nothing I've seen that can't be fixed," Wokoun said. "Our goal is to compete for the county and conference titles and we've got a lot of time."