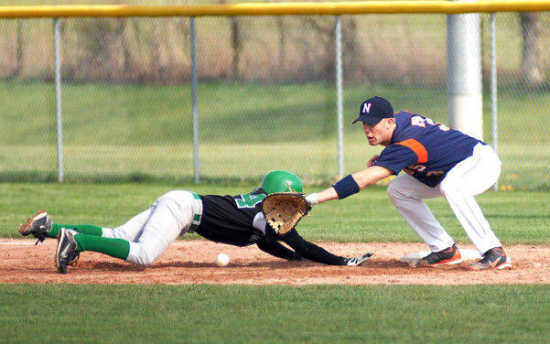 Cloverdale's Ethan Atwood dives back into first before North Putnam's Scott Hunt can get the ball for the tag.

ROACHDALE -- Mitchell Crum threw a no-hitter and North Putnam routed the Clovers 10-0 in the second game of the North Putnam and Cloverdale doubleheader Wednesday night.

"I got to give him credit," CHS coach Bryan Archer said. "Crum was throwing some good stuff tonight."

Crum finished the game with six strikeouts and was one walk away from a perfect game.

"He did a great job for us tonight," NPHS Coach Norm Fish said. "He threw strikes and was around the plate all night."

Crum, who was nearly speechless after throwing his first no-hitter of his high school career, said that he had a good night, but couldn't have done it with out the defense that his team backed him up with.

The game remained scoreless until the third inning, when Fish called for a gutsy squeeze play with the bases loaded with one out.

After Clover pitcher Justin Burdette loaded the bases with walks and hit batters, Fish looked at Crum and gave the signaled for the bunt. By the time Crum bunted the ball, CJ Lofton was just a few feet from home plate followed by Scott Hunt for the two-run single.

"If you execute the squeeze play right and bunt the ball deep enough, the other team shouldn't be able to throw you out," Fish said defending his gutsy move.

But one squeeze play wasn't enough, Fish called for another two batters later. This time giving Jerrett Ban the bunt signal and just like last time, Kyle Alcorn was just a few feet from home by the time the ball hit the ground, followed by Crum.

Fish pushed his luck, trying for three squeeze plays in a row, but it didn't happen.

Brock Jones went to bunt, but popped it straight up for the second out and then Kyle Martin gunned down Tyler Watson before he could get back to third base for the double play.

The Cougars continued their scoring frenzy in the bottom of the fourth, scoring their last six runs. Alcorn scored two of them with his RBI single and Watson drove in Alcorn with a double for another RBI, and was later balked in for the final run.

"We got off to a slow start in the second game," Fish said. "We didn't score until after the first two innings, but finally put the ball on the ground and ran a little and got going."

Burdette ended the night with two walks, five hit batters and allowed 10 runs, eight of which were earned, on six hits.

In the first game of the twinbill, North Putnam pummeled the Clovers 21-10 in six innings. North Putnam scored in every inning, except the third. They scored 21 runs on 17 hits, which included a two-run home run in the sixth by Watson and 370-foot solo shot from Ban.

The game was close and Cloverdale was giving the Cougars a run for their money, but then came the one inning that haunts the Clovers -- the fifth.

The Clovers pitching and fielding, gave up six runs; putting the Cougars up 15-8. Putting them out of reach for the remainder of the game.

"We were hitting and staying right there with them until the fifth inning," Archer said. "If our pitching and fielding hadn't fell apart, we would have been alright, but that was our infamous inning were go and kill ourselves."

The Cougars continued to pour it on in the sixth frame, scoring six more runs, nearly ensuring a 10-run rule victory. In the bottom of the sixth, Cloverdale scored two more runs attempting to push the game to seven innings, but it didn't happen.