Clovers come from behind, defeat Cadets by 5 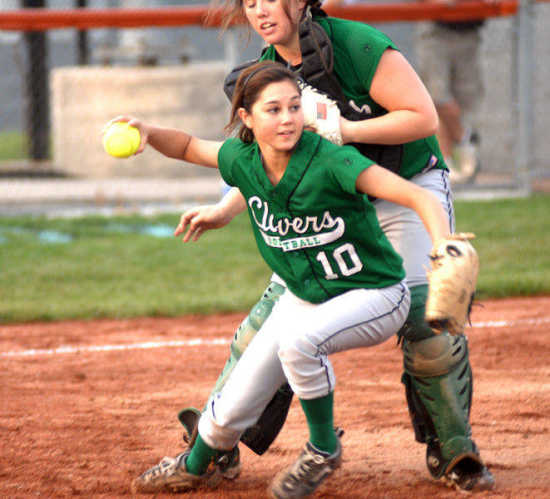 Cloverdale pitcher Paige Gutierrez readies to fire a throw to first base during Wednesday's contest at Cascade. The Clovers won 10-5.

CLAYTON -- A game that started with a tragic display of pitching, ended with a demonstration of true teamwork.

After Paige Gutierrez struck out 13 Cadets Monday and Cloverdale defeated them 1-0, Cascade came out with a vengeance Wednesday. The Lady Cadets hit nearly everything that Gutierrez threw at them in the first inning, resulting in a 5-0 lead. But that didn't put the Lady Clovers down, it inspired them to rally back and when it was said and done, Cloverdale defeated Cascade 10-5.

"Cascade came out on fire," CHS Coach Chuck Mowery said. "But we held our composure and stayed in the game and won."

Cascade had runners in scoring position two other times, once in the second inning and once in the sixth inning when they loaded the bases. But neither time did the lady Clovers' defense fold.

"I've been talking to them about keeping their composure when they get in tight spots and that's what they did tonight," Mowery said. "Paige had a rough night, but her team rallied behind her and played a solid defensive game.

"The defense definitely got a work out tonight and that's good for them," Mowery added.

Cloverdale scored its first run of the night when Martika Byrd hit a sacrifice fly, scoring Kara Knapp who reached earlier with a single.

But the big inning was still to come.

After going three up, three down in the second and third innings, Cloverdale's bats finally came to life in an explosion of hits. The Lady Clovers batted around the lineup, had seven hits, and seven RBIs. Kayla Shepherd got a big hit in the fourth when she drove one to the short stop and beat the throw to first scoring, Knapp and Whitney Bond. She then advanced to second after the first basemen missed the throw from shortstop.

Gutierrez capped off the explosive inning for the Clovers with a RBI double, plating Shepherd for an 8-5 lead.

"The fourth inning was big for us," Mowery said. "The girls got behind each other and played as a team and swung the bats well."

Knapp led the Clovers hit squad, going 3-for-4 with an RBI while Shepherd went 2-for-3 with three RBIs and Gutierrez went 2-for-2 with an RBI double and a sacrifice bunt. Brianna Hoff went 2-for-3 and had the RBI that started the Lady Clovers off in the fourth inning. Cloverdale ended the game with 13 hits and 10 RBIs.

Cloverdale returns to action on Monday when they host Speedway at 5 p.m.

Next Game -- Cloverdale returns to action on Monday when they host Speedway at 5 p.m.