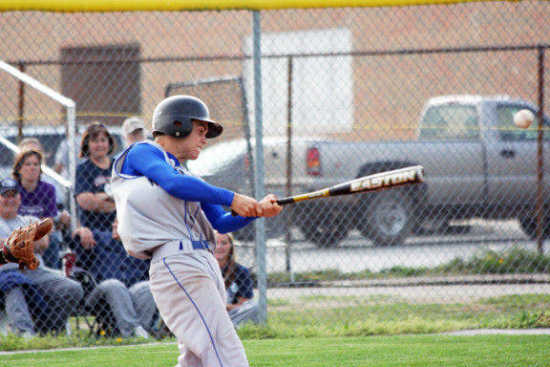 South Putnam's Grant Zimmerman connects on a single in the second inning of Wednesday's game with North Putnam. In addition to collecting four strikeouts on the mound, he stole four bases for the Eagles on the night.

The showdown was seven innings and it all came down the final six outs.

"A great game -- great game," SPHS head coach Troy Burgess said following the win. "Two good teams that played well. Both made a couple mistakes along the way, but both teams battled."

The Eagles held an advantage over North Putnam from the first inning on, but in the final inning the Cougars dug in and put South Putnam on the ropes.

South Putnam needed just three outs to head back home with a win, but the Cougars had other plans.

After recording one out, North Putnam senior Kyle Alcorn sent a grounder to second, but a bad throw to first put Alcorn on second and put the Cougars' in business.

In the bottom of the inning, the Eagles had to regroup in an effort to overcome the Cougars and they did just that.

With one out, the bases were loaded on two walks and a hit batter. Sophomore Brayden Freeman was walked to bring home Cameron Chestnut to tie the game at 5-all.

The Eagles had runners on second and third, with one out and needed just a single run to get another win.

Derek Dean came to the plate having gone 0-for-3 on the day and gave South Putnam their biggest hit of the night -- a bunt. On a first pitch offering from North Putnam's Reece Herron, Dean laid down a bunt as Grant Zimmerman streaked down the baseline from third. The ball kissed the grass and hit Herron in the mitt, who in turned flipped to home plate just a few seconds too late. Zimmerman crossed the plate to give South Putnam a 6-5 win.

"It would have been really easy for us to go out there an roll over after giving up two in the seventh and we didn't -- the kids battled back and put themselves in position," Burgess said. "Dean has to put that thing in play and he does -- perfect execution of it."

North Putnam head coach Norm Fish was proud of the way his squad battled back at the end of the contest, but wasn't too pleased with the team's effort throughout the contest.

"We stayed in the game. I don't think we hit like we could. I was disappointed in the middle of the game with how we competed," Fish commented. "I just thought we were happy to be close. We just seemed content to be within one run. I wasn't happy about that and I let them know it.

"We just have to recognize when a team is just waiting on us. I just thought South Putnam gave us every opportunity for us to come out and take this game away, but we didn't do it," he added.

The Eagles got good production out of Zimmerman on the mound. He pitched seven innings, giving up five walks and logging four strikeouts. The sophomore found himself behind on most occasions Wednesday, but was able to fight back and get the outs.

"We would like to see him work from ahead more, but I thought he threw a good game," Burgess said. "The thing that Grant seems to do is get strong as the innings go. He seems to get a little more pop to it. He pitched a great game and gave us a chance to win it there in the seventh."

The most disturbing aspect of the game for Fish was his team's sense of contentment. He noted that in order to pick up wins, they must develop more of a killer instinct.

"If we don't fix that, we're in trouble the rest of the season. We have to get some killer instinct or get hungry because we just seem content to be close. It's got me a little concerned because you can't win ball games that way,' Fish said.